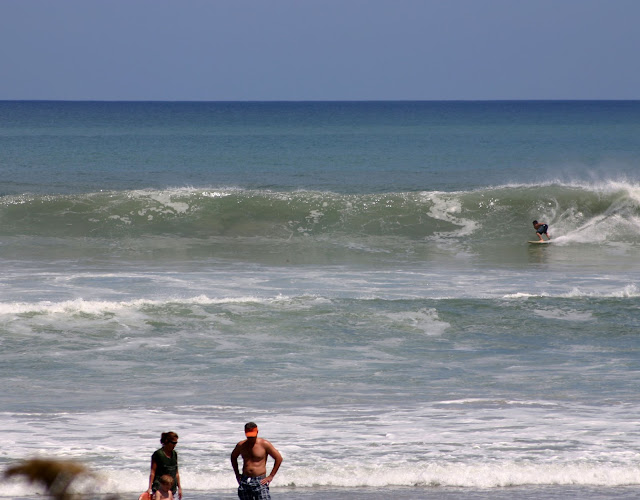 I didn't expect the condo market in March to continue at February's tepid pace and I was not disappointed. March roared in like a lion and as of this morning, April 2, the Cocoa Beach MLS is showing 66 closed condo units in Cocoa Beach and Cape Canaveral in the month. As always that number will grow as lazy listing agents get off their backsides and record their closed listings. Single family home sales were slow with only seven closed.

There were three noticeable trend shifts in March. They were:

Higher Priced Units - Higher priced units were very active and the premium buyers were willing to pay for exceptional units was evident. In the last twelve months only seven oceanfront units have commanded more than $300 per square foot. Five of those seven closed last month. This trend is likely to continue. Three of the seven record-setting sellers were represented by Cocoa Beach's powerhouse little agency, Walker Bagwell Properties. Seventeen units sold for more than $300,000 with nine of those over $450,000. Highest price paid in the month was $1.1 MM for the entire 6th floor of the Riomar building in south Cocoa Beach. Fully and beautifully furnished with 3008 square feet and four bedrooms and 3.5 baths it is an exceptional unit. Not surprising, it was a WB listing.

Currency Exchange - The effect of the weakening dollar that began in January began affecting local sales. As foreign currencies, especially the Euro, the British pound and the Canadian dollar, began rising from historic lows it became prudent for foreign owners of US properties to consider selling to lock in profits before the deteriorating exchange wiped those paper profits out. With quite a few properties in Cocoa Beach and Cape Canaveral owned by Canadians and Europeans that currency shift spurred a few sales. If the dollar continues to weaken, at some point this will have the reverse incentive and begin encouraging purchases by foreigners as their currencies gain purchasing power.

Condo Mortgages - March 2016 saw the highest percentage of condo buyers using mortgages since 2008. After running at around one out of three sales for six years, exactly half of condo buyers in March used a mortgage for their purchase. This in spite of the difficulties involved with Florida condo mortgages.

Our inventory is hanging steady at around 300 units for sale in the two cities. In spite of the fact that only seven units have closed for over $300 per square foot in the last 12 months, 29 of the current listings are asking over that number, five of those over $400 a foot. I suspect that only eight of the 29 stand a chance of getting over $300/sf, none of those in the one collectively-delusional building with six crazily overpriced listings. Having said that, I do expect prices to continue the steady upward direction that they've been in for the last six or so years. If you are selling an oceanfront condo and are expecting over $300 a foot, it better have a great view, be new or nicely remodeled and have a garage. If it's original 1985 condition or has an average remodel you're not going to get that number. However, you will get the best price you could have gotten in the last several years. If you've got a unit that you think deserves a premium, let's talk.

Nine of the 66 sold units closed at or above full asking price. The average selling price was 95% of last asking price. Twenty eight sold in a month or less. All but three of those 28 sold without a price reduction. Of the 22 listings that had to reduce price, average days on market was 101. Of those that sold without a price reduction, average days on market was 52. Obviously, if a seller wants to sell quickly, pricing right is instrumental.

Before making an offer, a buyer is faced with the somewhat daunting task of determining if a listing is overpriced or not. If it's one of the priced-right listings, offering below full asking is probably a recipe for failure. On the other hand, if it is overpriced, there is a possibility of getting it well below asking. Without knowing current fair market value, a buyer is dancing in the dark. Most good buyer's agents that are active in our market can determine fair value. When I say "our market" I mean Cocoa Beach and Cape Canaveral. The rest of Brevard County has no relevance to this market. I will add that it takes more than MLS access to figure out fair market value. An agent from off the beach may not know relevant details to recent sales and is at risk of misjudging value. I see it all the time and use it to my clients' advantage. Whether someone is buying or selling, using an agent from the immediate area can help prevent costly mistakes. Three dozen sales in Merritt Island or Palm Bay last year does not assure an agent is qualified to navigate the beachside market.

The Banana River made a remarkable snapback this week. After a broad, brown tide algae bloom that triggered a massive fish kill last week most folks were concerned that this was it, no going back. I'm happy to report that the river has cleared up somewhat and there are good numbers of fish and crabs still alive. Mullet are jumping, birds are diving and stone crabs are finding their way into traps. Not saying it wasn't a significant event but that it was probably not as bad as most hyperbolic Facebook posts might suggest. If we can get our nutrient runoff under control we stand a good chance of seeing the river back in its previous pristine glory. The City of Cocoa Beach is to be commended for getting in front of the problem with sewer upgrades, runoff containment and muck-dredging already ongoing before the bloom.

Satellite surveillance reported a large swarm of humans flowing northward away from Cocoa Beach all day on Friday. Simultaneously, the Cocoa Beach Country Club announced a precipitous drop-off in tee time reservations and an impending green fee reduction. Likewise, early bird attendance at local restaurants was down significantly Friday evening and, according to experts, expected to continue through the end of the year. Theories abound but most locals are not concerning themselves with the details. I think with the reduced traffic I'll drive to the Port for lunch and maybe schedule 18 holes at the Country Club.

"As you get older, the questions come down to about two. How long? And what do I do with the time I've got left?" ___David Bowie