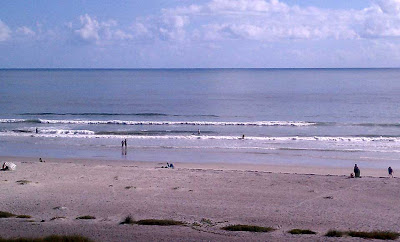 Welcome and best of luck to our new Cocoa Beach City Commissioner.

A direct ocean Canaveral Towers 2nd floor 3/2 closed for $240,000. Fully furnished with two ocean balconies. This is a weekly rental building with excellent income opportunities for owners who choose to rent.

A 2nd floor direct ocean Sand Dunes 1/1 in Cape Canaveral closed for $187,000. It was fully furnished and came with a 1 car garage.

A direct river Bay Club of Cocoa Beach (across the street from the schools on Minutemen) sold for $175,000. This top floor (2nd) corner unit had 1570 square feet, 3 bedrooms, 2 baths and a boat slip. No garages at this small building.

Mystic Vistas in Cape Canaveral was active in October with four recorded sales as of this morning although there may be some others not accounted for yet. The sales so far recorded ranged from a jaw-dropping $130,000 to $187,000. All were 3/2 units between 1994 and 2010 square feet with garages.

Another Perlas del Mar unit closed as a short sale for $161,000. The train of foreclosures and short sales may be coming to an end in this unfortunately timed complex. Every sale in the last two years there has been either a short sale or a foreclosure. As of this morning there is only one unit actively for sale on the MLS. These big, luxurious units sold for as much as $345,000 new a few years ago.

A direct ocean, 2nd floor, 2/2 southeast corner at Windjammer in Cape Canaveral sold for $160,000, quite a deal even though the unit was in original condition. In fact it was such a compelling price for the buyer that another owner exercised their first right of refusal and bought the unit, pushing the original buyer out.

Two Banana Bay of Cocoa Beach 2/2 townhomes with open parking closed in the month setting new lows for the complex, one for $90,000 and a foreclosed unit for $68,250.

One of the non-waterfront Four Seasons 2/2 units with open parking sold for $82,500.

Another complex setting a new low was The Diplomat in Cocoa Beach. A ground floor, non-oceanfront 2/1 in need of extensive repairs went for $64,000.

Non-condo residential sales were quite brisk for the month with 14 sales of MLS-listed homes in the two cities. Prices ranged from $105,000 for a 5 year old 2/2 half-duplex with garage in Cape Canaveral to $960,000 for a super nice 4/3 single family on 75 feet of direct ocean beach just south of downtown Cocoa Beach. Cocoa Beach canalfront home sales ranged from $360,000 for a gorgeous remodeled 3/2 with 2373 square feet and pool on Barrello to $201,000 for a 1592 sf home in need of extensive work or possible tear-down on Trinidad.

Lowest price for a freestanding single family was a foreclosed, non-waterfront, fixer-upper in Snug Harbor on a .17 acre lot that closed for $123,000.