Ah, that time of the year when the networks take a nostalgic look back and the smell of the traditional New Year's meal, black-eyed peas and collard greens, fills my house. Real estate activity has remained slow but steady through the end of the year. 2006 was a pivotal year for the real estate market in Cocoa Beach and Cape Canaveral. The slowdown that I began warning about in March of 2005 in this blog became a reality after the much-hoped-for spring rally of '06 never materialized. Florida Today reported this week that the actual market peak was in Aug. 2005. It just took a while for the reality to become obvious to market participants.

The activity in 2006 was mixed as some investors managed to hit homeruns with their pre-construction contracts at the same time that others were defaulting on contracts that they had hoped to flip. Several condo projects closed this year which contributed to the count of closed MLS units. In particular, Portside Villas, which is now closed out, had substantial numbers of flipped contracts. Michelina on the ocean also closed but did not contribute to the closed numbers of MLS-listed units. Major projects set to close in 2007 include Magnolia Bay, 3800 on the ocean, Villa Verde, Pier Resort and Ocean Club. These likely will not impact closed MLS numbers as there will be very few flipped contracts. The Cocoa Cabanas project on the ocean has yet to break ground and appears stalled while the 4th building at Magnolia Bay across the street has not materialized.

We began the year with a condo inventory hovering around 700 units with 30 year fixed-rate mortgages just above 6%. We are exiting 2006 with mortgage rates pretty much unchanged and condo inventory at 1024, up almost 50%. Single-family home inventory has seen a similar increase, from 102 on Jan. 12, 06 to 152 today.

In the upper end of the condo market we had 52 closed sales of $500,000+ units with current inventory of $500K+ units at 203, practically unchanged from year-ago levels. Of those 203 units for sale, 119 were built in 2005 or later. There were 476 total condo sales in all prices since Jan. 1 and 69 single-family home sales. Current inventory of single-family homes stands at 152. One interesting tidbit; only one MLS-listed condo sold in 2006 for over $1,000,000. That has to be of concern to the sellers of the 18 currently-offered units on the MLS, not to mention the developers sitting on unsold units in that price range.

As always, these numbers are not exact. The MLS data is only as accurate as those who input the data and we know who they are (R-word). The overall trend is clear, however. Sales of real estate in Cocoa Beach and Cape Canaveral in 2006 were at a pace about half that of 2005. There is no accurate way to extract average price movement data directly from the MLS, but, if you're willing to trust my anecdotal observations, price drops have been downward across the board, substantial in some individual cases. We saw 3 bedroom Portside units sell for $100,000 less than 2005 prices. A beautiful Harbor Isles 3 bedroom completely remodeled unit sold for less than $220,000 and a direct ocean Waters Edge condo went for $208 per square foot. There are still incredible deals out there but some are already disappearing. At Portside the sub-$200,000, 2 and 3 bedrooms are all gone. Lowest currently-offered 2 bedroom unit is $213,900 and lowest 3 bedroom is $224,900. Those buyers who were brave enough to pull the trigger during the last days of closings picked up 2 bedroom units as low as $178,000 and 3 bedroom units as low as $190,000. Lesson here is that some deals will not be repeated. As builders are warning now, after this shakeout plays out, new construction costs will force prices much higher than current levels.

I'm not calling a bottom here, nor even a leveling out. What I am saying is that for buyers looking to buy at any point in the future, the time to start looking is now. If you wanted a brand new 2 bedroom condo in Cape Canaveral for under $180,000, you have already missed your chance. If you wanted the nicest 3 bedroom unit in Harbor Isles for under $225,000, too late. If you want a brand new over $500,000 condo, wait a little longer. We'll see increasing pressure in that price range. If you'd like a nice existing condo, be looking now and be ready to pounce when that isolated, motivated seller drops his price to the can't-refuse level.

My next post will be from a brand new year. It's been a fun year for my crew and we're looking forward to more fun and games in 2007. I wish you all a happy and prosperous New Year.

Posted by Larry Walker at 10:47 AM No comments:

Are We There Yet? 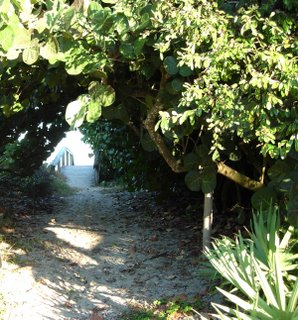 Can you see light at the end of the tunnel of declining prices? Depends on the source. The tunnel at the left is one of my favorite beach crossovers in south Cocoa Beach. About that other tunnel: In a remarkable article this week, Florida Today claimed that Brevard housing appreciated at a rate of 9.67% from the 3rd quarter of 2005 to the 3rd quarter of 2006. If they weren't hurting so much, most folks that purchased in the 4th quarter of last year would probably have snorted coffee out their noses. The author does offer that this data from the Office of Federal Housing Enterprise Oversight is at odds with the most recent report from the Florida Association of Realtors. At any rate, as I have cautioned in the past, treat all statistics with suspicion. I'm sure there are properties that have experienced even higher appreciation during the period for various reasons but I seriously doubt that the average existing property gained any value in the last 12 months. This brings up a good point. If one purchases far enough below market value, appreciation can be had even in a declining market. I continue to see deals happening at below current value.

Of the 28 condo sales in Cocoa Beach and Cape Canaveral reported as closed in the month of November 2006 by our MLS, the range of prices for direct oceanfront condos was from $263 to $335 per square foot. In non-waterfront units the prices ranged from a super low $100 per square foot to $259. I am happy to have put a buyer in a beautiful brand-new unit for a bottom-scraping $129 per square foot while a similar 20 year old unit nearby sold for $202/sq.ft.

What a wonderful weekend we had in Cocoa Beach. The weather was perfect. There were small, fun waves and the water was in the high 70s. Not many out-of-towners enjoyed it but I spotted quite a few locals headed to the beach for a fun session. 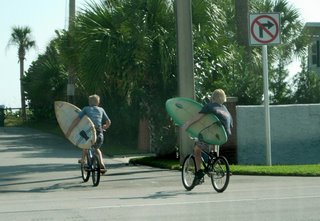 Posted by Larry Walker at 10:16 AM No comments: