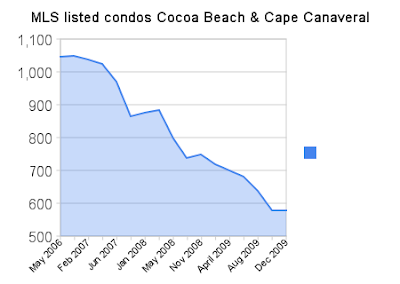 Where are the new listings? If I look at the number of new listings every month it appears that we have a steady stream of new listings exceeding the sales. However, the chart above of actual inventory of MLS listings tells another story. Digging into the Cocoa Beach MLS data, I find that only 10 of the 33 new condo listings so far this month are actually first-time new listings. The other 23 are listings that have either expired and been relisted or withdrawn and relisted by the same agent to reset the "days on market" number in the MLS. This explains the evidence in the chart above that the actual number of listings has declined substantially. The new listing activity on the MLS is predominated by the churning of existing listings. This does not mean that there aren't new deals appearing. It only means that the number of listings selling exceeds the number of actual new listings. Many of the reticent, over-priced sellers eventually concede to market reality and those are the ones that sell. (See the anatomy of a round trip at the bottom of this post.)

A buyer in this market has to be more prepared than in the recent past if they hope to pick off a deal. Eventually we will find that we have surfaced into a normal market without a high number of distressed sellers. Are we close to that point? I can't say but I can say that we are closer than earlier this year and that finding that smoking deal has become more difficult as we work through the limited number of distressed sellers in our small market. If you're hanging on waiting for clear evidence of a market bottom, that evidence may come in the form of no more distressed sales. Plan your purchase timing accordingly. 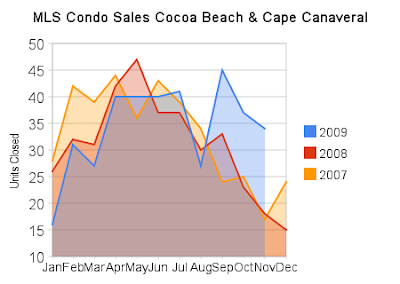 Anatomy of a round trip (emotional and financial). A Cocoa Beach townhouse was purchased in April 2004 for $149,000 [confidence]. It was put back on the market four days later for $229,000 [enthusiasm] and stayed at that asking price until December 2004 when the listing expired. It was relisted in March of 2005 for $285,000 [greed] by the same listing agent. The market was still rapidly appreciating and the flipper was probably calculating his increased net worth daily over his morning coffee, hence the increased asking price. He kept the asking price unchanged until August of that year [denial] when the listing expired again. This time the flipper relisted with another broker the following week for $279,000 [denial mixed with a little concern], expectations beginning to abate. Price held firm until December 2005 when the listing again expired unsold. It disappeared from the MLS until May of 2009 when it reappeared with a new listing agent asking $154,900 [fear]. Price was dropped in August to $149,000 and again in November to $139,000 [panic]. Now that the seller has accepted market reality he is within striking distance of finding a buyer. There have been six sales in the complex during the time this unit was listed, all six for more than the current asking price. One red pill at any time in the last five years would have been worth not less than $10,000 to this seller.