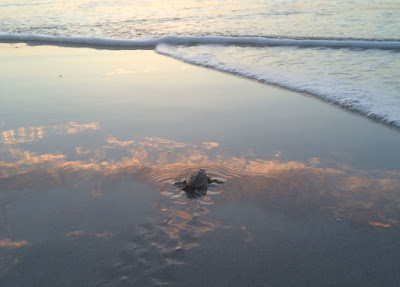 The bumper mango harvest is almost finished here for 2016. It's been a good one.

The little turtle pictured hatched early in the morning (not a good time) in south Cocoa Beach and was just making his way to the ocean as the sun was rising. There was a flock of crows picking off stragglers but with a little human scarecrow action this one made it safely to the ocean for his first day of life.

We entered August with an inventory of just under 250 total condos and townhomes for sale in Cocoa Beach and Cape Canaveral. That's the number of units that have closed since early April this year. The demand/supply imbalance continues to pressure prices higher. Lacking some unforeseen macro event I see nothing to reverse this trend.

Our depleted inventory is part of the aftermath of the bust in 2006-07. When prices fell off the cliff then we had a tremendous amount of supply force-pushed forward. Many people who may have been planning to sell their properties a few years down the road suddenly found themselves upside down (owing more than the property was worth). The decision became; wait it out and hope the value returns soon, sell for a loss, do a short sale or let the bank take it back. Those that decided to wait it out, in some cases, are still waiting almost a decade later. The majority chose to dispose of their properties before it got any worse. The result for us in 2016 is low inventory because some of what would have been for sale this year was forced onto the market years earlier.

I give these examples for those who are concerned about prices. Our increase has been healthy and orderly since bottoming out about five or six years ago. Bargains relative to peak prices are still being had as long as buyers can accept that they missed the absolute bottom. I see current prices in our slowly rising market with an abundance of demand as attractive. Long-time readers know I have no reservations calling it the other way if or when I see it.

I heard Bob Iger of Disney say this past week that he is not concerned with any impact from Zika fears to their Florida businesses. Maybe they're immune but I have lost $795 so far from Zika concerns. A pregnant guest cancelled a reservation on advice from her doctor not to travel to "anywhere in Florida". I agree with his "safer than sorry" caution and hope the few number of cases will be confined to the small area in Miami where the only Florida cases have shown up. Luckily we don't see many if any mosquitoes of any kind oceanfront in Cocoa Beach. The sea breeze does more than cool us off on hot days.

Two weeks until snook season opens and, on an unknown date but soon, the mullet run begins. Get the surf fishing gear ready for the best beach fishing of the year.

What's the deal?
Spin the wheel
If the dice are hot...take a shot
Play your cards. Show us what you got
What you're holding
If the cards are cold
Don't go folding
Lady Luck is golden
She favors the bold.
__________________Roll the Bones by Rush

Posted by Larry Walker at 10:28 AM No comments: