Those of you tracking property prices with intentions of possibly purchasing should also be looking at the impact of interest rates if you're planning to finance your purchase. Freddie Mac's December 24th survey finds the national average of 30 year fixed rate mortgages at 5.19%, their lowest point of the year and a full point and a quarter below the rate just seven weeks earlier. The payment on a $300,000 mortgage has dropped by $252 per month in just seven weeks, the equivalent of a $40,000 price cut. Definitely not insignificant.

The weather in Cocoa Beach continues to hover in the mid-70s as we approach 2009. I'm seeing winter on the TV but it just hasn't touched us here, yet. My best wishes to all of you for a prosperous New Year. I will do my year-end wrap-up next week with my picks for deals of the year with a few dubious distinctions for flavor. Should be interesting. Peace out.

What a week of beautiful weather we've had in Cocoa Beach. While the Weather Channel has focused on the winter storms in other areas of the country, we've been in the 70s every day with little or no wind and a persistent, clean, head-high swell to keep the surfers occupied. The great beach weather has made procrastinating about holiday shopping justifiable, at least in my mind.

As is normal for this time of year, with time off for the holidays, buyers are out in force and we will likely see quite a few properties go under contract before the first of the year. Among the likely targets are the recently reduced direct ocean 2/2 at Waters Edge in south Cocoa Beach. This unit is now offered as a short sale with a suggested price of $179,000, the lowest priced direct ocean 2/2 by a mile. It's view is obstructed by the dune vegetation but it is now priced as if it were smaller, crummier and blocks from the beach. Another favorite of mine is a big (1447 sq. ft.) 3rd floor, 2/2 south view at the 11 year-old Sand Dunes building in Cape Canaveral just reduced to $299,000. Offered fully furnished. The 3000 sq. ft. penthouse direct river unit at Crescent Palms that I mentioned in an earlier post that was offered as a short sale for $399,000 is under contract. None of the units mentioned here are listed by my firm.

Hope you all have a happy and safe holiday season and that the new year brings you prosperity and fulfillment. If you need to contact me before December 26, forget the email and please call my cell, 321.917.5786. I'll be back in the office on December 27. I'll leave you with a shot of a secret holiday pool somewhere in south Cocoa Beach.

"Look at the stars and how they shine for you, and all the things that you do."
______Chris Martin - Coldplay
Posted by Larry Walker at 10:09 AM No comments: 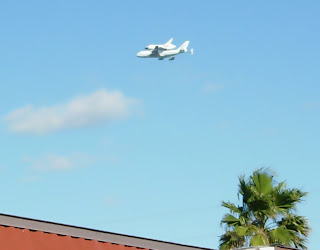 The shuttle Endeavour catches a ride back home on a 747 last Friday after initially landing in California due to bad weather at the Cape. The pilots usually cruise low and slow down the beach when returning for all to see. I've seen proud locals spontaneously stand from their beach towels and applaud the safe return of our spacecraft as it cruises by. It's a goose bump moment the first time you see this public display of patriotism and local pride.

Sales and listing activity has been slow as everyone's focus has shifted into holiday/year-end mode. There have been three closed sales of condos so far this month in Cocoa Beach and Cape Canaveral with 20 new contracts executed in the same period. Hopefully we will see a spike in new listings after New Years for those of you still waiting for that perfect unit at the right price.

Among the attractively priced oceanfront units currently offered is a new short sale listing at Park Place in downtown Cocoa Beach; a 2nd floor, 2/2 direct ocean unit being offered for $270,000. There is also a top floor, direct ocean 2/2 at Spanish Main being offered for $299,900. Spanish Main is one of the small handful of buildings that allow weekly rentals. These units rent for between $800 and $1200 per week for most of the year. This is the view.

System of a Down 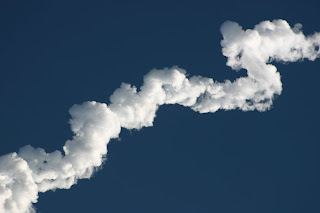 Today we get another case history of a bad selling strategy. This is the price history of a 3rd floor original condition, side view condo in an older oceanfront building that has been on the market for 687 days.

After 687 days on the market this seller has shaved 40% off his asking price. During the time since first listing there have been sales of five units in the building, two for $330,000 and three for less than the current asking price. Several were in better shape than the subject unit. Today after eight price drops he is still asking more than two other currently-listed units in the building. My suspicion is that the price drops are not over if he seriously wants to sell. Since the day this unit was first listed, 181 oceanfront condos with at least 2 bedrooms and 2 baths have closed in Cocoa Beach and Cape Canaveral for less than the original asking price of this unit. Sellers take note. This is not the way to sell your unit.

"You say it best when you say nothing at all."
_______Paul Overstreet and Don Schlitz
Posted by Larry Walker at 10:33 AM No comments: