Everything is fine, ...really

The market has bottomed, inventory has dried up and prices are expected to skyrocket next year. Buy now or be priced out forever, historically low mortgage rates, population explosion, baby boomers, European buyers, median price up, year-over-year sales up, blah, blah, blah.


Let me translate the above Realtor-speak; "I will tell you anything in hopes of generating a commission check." Folks, some segments of this market are still dangerous and it would be prudent to be cautious with your real estate search. If your agent is saying any of the above phrases while waving his Time2Buy button before your eyes, put your hand on your checkbook, yell "watch out for the squirrel" and roll out of his Lexus onto the pavement. The damage to your body will probably be cheaper than the damage to your finances that was about to happen. This is historically the busiest time of the year for sales in our market and it would be easy for me to tell you that the recent activity in our market is evidence of the end of the troubled times, but, it just ain't so. There are scattered super deals to be had but they do not represent the bulk of the available listings and, if you aren't on top of recent activity, you won't be able to recognize the deals when you see them. The vast majority of current listings are over-priced. You need to be able to determine current value and negotiate a price below that number. If you can't, move on. The patient buyers are being rewarded.

There is a special danger in the high-end condo market as developers are sitting on dozens of units that they cannot move. Most of this inventory is not on the MLS so the reality of this segment of our market is hidden from examination but my observations tell me we are approaching a tipping point. No one knows how this will play out in individual complexes but the recent auction by the developer at Mystic Vistas likely sent a chill down the spine of every owner in that complex, especially when the record low prices became known. Owners in other not-sold-out new buildings and complexes should be similarly concerned. When a developer decides to unload his remaining inventory, all other units' values will be affected. If you're looking to buy in a new building, ask how many units are still unsold, find out how many (if any) owners are delinquent on their monthly fees and, most of all, be prepared to wait a long time for any appreciation. No rational person can look at the level of inventory and the rate of sales in the high-end condo market and expect things to turn around anytime soon. That doesn't mean there are no good reasons to own a condo in our great community. If you can strike a great deal and don't mind the possibility of no appreciation for a while, the best little beach town in Florida is waiting for you. The market decline so far does not appear to have affected the beach, the surf or the fishing. The market's direction was the last thing on my mind this morning as I stalked tarpon in the surf before coming to the office.

My intent from the day of my first post here in 2005 was to give you readers timely, accurate and honest information about the Cocoa Beach and Cape Canaveral real estate market. From the hundreds of emails I've received over the years, I know that many of you have profited from knowledge gained here. There is wheat and there is chaff. If you're buying or selling real estate in our market, you better know how to separate it.

Posted by Larry Walker at 9:32 AM No comments:

Just a quick note this morning on a new foreclosure offering in south Cocoa Beach. I have written about this unit in the past when the seller was trying to do a short sale and Countrywide had agreed to a price more than $260,000 less than the owner paid. No buyers materialized for the short sale and Countrywide is now the unhappy owner of this unit after foreclosure. They are so unhappy, in fact, that they are offering the unit for $342,900, less than half the $699,000 that the owner paid in December of 2005 when this unit was new.

It's never been lived in, is a 2160 sq.ft., 3rd floor corner, direct river with expansive views across the mile-wide part of the Banana River and has 3 bedrooms and 3 baths. I took the photo above standing in the kitchen looking out at the river. Here's a link to all the data on this unit. Pay no attention to the asking price. It is now $342,900. If you'd like more info on this unit, email me at larry@southcocoabeach.com
Posted by Larry Walker at 8:45 AM No comments:

From denial to anger

Delay is the deadliest form of denial.
_________C. Northcote Parkinson


This market is getting weirder with every passing day. I presented an offer on a riverfront condo this week with our offering price based on the most recent sale in the same building. I explained to the listing agent that we were offering slightly higher than the sale last week would suggest for this smaller unit. Her response; "That sale doesn't count because those people really had to sell and it had been on the market forever." I suggested that the appraisal of the next unit to sell in the building would certainly use that sale as a comp and the appraiser would not care that they "had to sell" being that it was not a short sale or foreclosure. Her response; "You just don't get it."

She did present our offer to the seller who has had his unit on the market for 274 days with two price reductions. His response to our offer was, and she made sure to quote verbatim, "No, no and hell, no." No counter, he stuck to full asking price. A short while after the agent relayed his response to me, she called back with a new message from the seller who apparently felt he hadn't said enough, "Tell them to go buy another unit." We did just that. Good luck Mr. Seller. You're still overpriced, paying property taxes, insurance, condo fees and interest on an unoccupied unit and the Labor Day precipice is approaching while your neighbors that have come to terms with the market are selling their units.

We have had 21 closed sales of condos in Cocoa Beach and Cape Canaveral so far this month. Two notable deals were a 2/2 side ocean view, 3rd floor Chateau by the Sea that closed yesterday for $215,000 and a 2nd floor, direct ocean Sand Dollar 2/2 at Windrush that sold for $310,000. These two sales will have a chilling effect on future sales of units in these buildings. As always, if you're looking, be sure to do your homework and work with someone you can trust who knows this market. You may have to be patient to find the perfect deal as the bulk of the sellers are still deep in da Nile.

It's all about the bottom line

We've had an unusually large amount of sargassum (above) washing up on our beaches in the last few weeks since the west winds turned east. Lots of cool little creatures live in this weed when it's floating; crabs, shrimp, sea horses, baby fish and so forth.

I posted back in February in the "Blue Pill or Red Pill" post about the percentage difference between asking price and selling price for condos closed that month. I am seeing more and more buyers keying in on the discount off asking price rather than looking at the final number. Macy's has successfully cashed in on the mentality of big discount = great deal while Wal-Mart and Target have successfully exploited the strategy of low regular prices. It's a natural to want a big discount when purchasing something. It feels good to find a $200 dress at 50% off regular price and then to get an additional 50% off at the register. Great deal, huh? Not if that same dress is $45 regular price at Target. It's just that the Macy's model makes us feel like we got a better deal.

The point here is that expecting a big discount off the current asking price is probably a recipe for disappointment. Only one of the seven sellers this month accepted less than 91% of their asking price although almost all took a severe discount from their original asking price. Most sellers in this market have had to get through a period of denial to get to a point where they were willing to consider accepting much less than their original idea of their property's worth. To get a good deal in this market it helps to have access to the true listing histories (not readily apparent on the MLS without some digging) and awareness of very recent comps. Armed with this knowledge a savvy buyer can target the listings that are within striking range of fair value and/or those that have gone through several price drops and work towards a number somewhere south of today's value. Your mortgage lender does not care what the asking price was, only what you are actually paying. Forget the discount and focus on the final number. That's the only one that matters.

"Knowledge is of no value unless you put it into practice."
_______Anton Chekhov
Posted by Larry Walker at 8:51 AM No comments:

She thinks that happiness is a mat that sits on her doorway.
~Rob Thomas, "3 A.M."

Sorry for the lack of posts recently. I've been at the beautiful spot above about an hour and fifteen minutes southeast of Cocoa Beach for the last week. What an easy trip; park a short stroll from the front door of the Melbourne airport, check-in with no lines and board a small plane for the hour and fifteen minute flight to Marsh Harbor. Pick up the rental boat, cruise over to Elbow Cay and be relaxing on the deck overlooking the ocean in less than 3.5 hours total from walking out the door in Cocoa Beach. 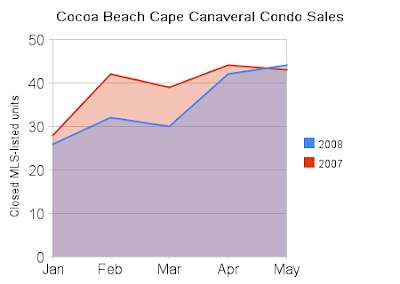 Condo sales in May were brisk, beating April with 45 units closed. This is the first month this year that we have exceeded last year's sales for the same month. The big question now is where are we headed for the rest of 2008. As you can see from the chart above, the sales trends in 2008 have closely followed the action in 2007. Consider the chart below showing last year's action through year-end along with this year's sales so far. If you are a seller of a condominium it would be prudent to examine last year's trend and to re-evaluate your plan for selling your unit this year. Sales will likely continue to fall as we move through the summer. If you haven't had an offer so far, you're probably over-priced. Price your unit aggressively and you stand a good chance of selling. Forty five sellers did just that and sold their units last month. 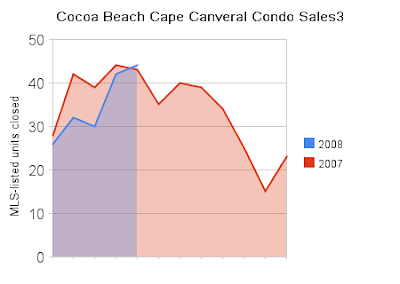 Here's another shot from the Abacos; on a tiny deserted island overlooking the magnificent coral gardens of Fowl Cay between Man O' War and Scotland Cay. The snorkeling here is as good as it gets. This little island has a beautiful sandy beach on the west side and a rocky shore on the east.

There are some days when I think I'm going to die from an overdose of satisfaction.
~Salvador Dali

Posted by Larry Walker at 11:17 AM No comments: