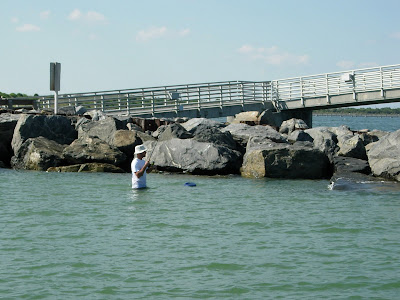 With a lot of media chatter about mortgage rates at another all-time low this week my curiosity got me to wondering how much impact the cheap money was having on our current condo sales. Knowing how stringent requirements for condo loans are at the moment, I didn't expect to see a lot of condo sales involving financing even with 30 year fixed rates below 4.2%. The results confirmed my suspicions. Money may be cheap but, for Florida condo buyers, the series of hoops that the lenders are requiring a buyer to jump through has become a test that is increasingly difficult to pass. The chart below is of mortgage rates since September 2007. 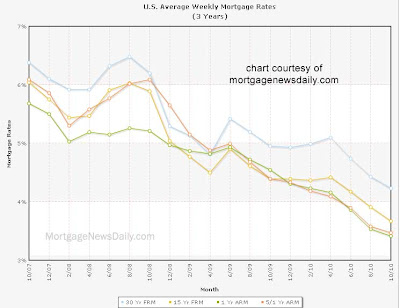 In addition to the most recent month, September 2010, I pulled results for the preceding three Septembers to get a feel for the trend in place. In September 2010 there were 34 total closed MLS-listed condo sales in Cocoa Beach and Cape Canaveral. Of the total, 65% were cash sales. The cash deals were scattered across all price ranges. Looking at September sales in the last four years we find that as mortgage rates were declining the percentage of cash sales was climbing. Much, but not all, of that trend is a reflection of the tightening requirements for condo loans during that time. Back in September 2007 cash sales represented only 21% of the total condo sales in our market. It has been on a steady climb since as the chart below shows. 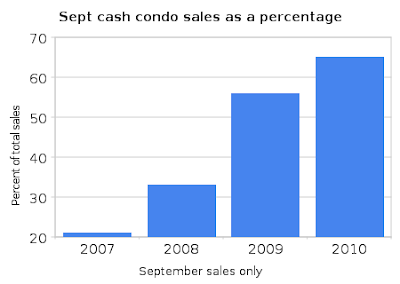 Taking our same four Septembers and filtering for distressed sales, we find that in 2007 there was not a single short or foreclosure sale of a condo in Cocoa Beach or Cape Canaveral as reported by the MLS. Looking at our chart below of the same metric (percentage of distressed condo sales in September since 2007) we see that that percentage has been on a steady increase with 56% of the 34 sold units in September 2010 being either short sales or foreclosures. 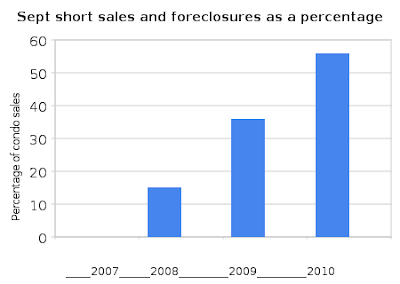 The last stat I pulled up was condo and townhouse inventory in Cocoa Beach and Cape Canaveral in each of the four Septembers. Readers of this blog will know that our inventory has been on a steady decline since 2006 with the present number at a record low, 484 units, 19% either short sales or foreclosures. It is interesting to note that even with distressed sales making up only 19% of total inventory, they made up 56% of the total sales last month. You can draw your own conclusions from that anomaly. If you're thinking of pursuing a short sale, know that of the 9 closed short sales in September, four closed in 2 months or less and five took from four to more than six months to close. Tip; all four of the fast closes indicated in the listing narrative that the sale price was "bank approved". 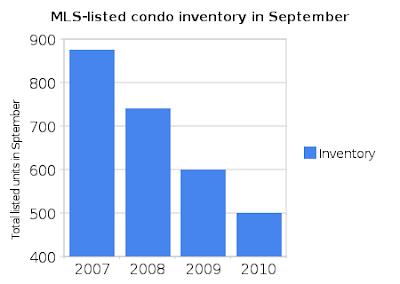 As always, if you'd like a bulldog, well-informed buyer's agent to represent you in the battle with the often-difficult and uninformed sellers, I'm your man. My goal is to get my clients the best possible deal on the best possible property and, as my posts indicate, I do my homework and know my market and I enjoy it. You can email me at larry@southcocoabeach.com