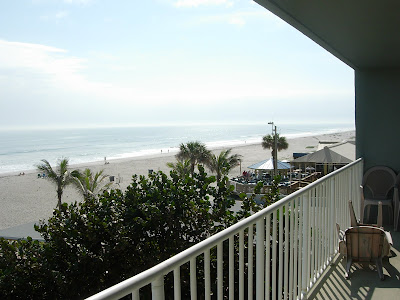 I mentioned in the year's first post that we would soon see convergence on the graph of yearly sales and inventory of MLS listed condos in Cocoa Beach and Cape Canaveral. What I failed to take into account was that the convergence had already happened if we look at the sales on a monthly basis rather than yearly [extrapolated chart below]. We hit exactly one year's worth of inventory sometime in mid-December. This burn rate has been steadily declining from a high of 25 months supply (all prices) in 2006.

The supply number for luxury (over $500,000) condos has been knocked down even more from a high of over seven years supply to the current less than two years supply based on 2010's sales and today's MLS inventory. Two major factors in this decline was the sellout of Meridian last year and the decline in prices of unsold units pushing many below the half-million dollar mark. Keep in mind that the real number of "for sale" luxury units is understated on the MLS. 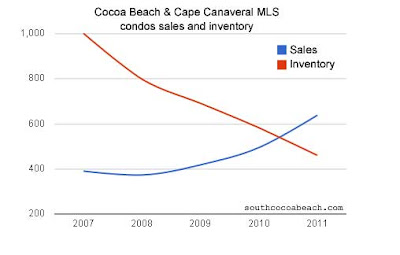 In condo sales another Meridian owner has bailed at a loss. This first floor (actually second floor in this building) direct 3/2 unit closed for $545,000 just two and a half years after selling new for $627,000. The original selling broker received a check for $31,350 as this was in the time when the developer was enticing agents with obscene paydays for delivering buyers. You know how I feel about this practice.

A bomb of a deal hit at Crescent Beach Club in south Cocoa Beach when a 4th floor, direct ocean, original condition 3/2 with 1804 square feet and garage sold for $249,000 this week.

At the low end of the price scale a foreclosed small 1/1 unit in the riverfront complex Essex House of Cocoa Beach sold for $28,000.

When two opposite points of view are expressed with equal intensity, the truth does not necessarily lie exactly halfway between them. It is possible for one side to be simply wrong.____ Richard Dawkins