In lieu of any interesting developments worth writing about since the last post, I'm reposting an old story that I was reminded of when I walked in a convenience store in south Cocoa Beach this week and saw an old familiar face behind the counter, Gary. He was one of the victims in the original story about the impact of the Magnolia Bay development in which I was unfortunately involved.

I, in a moment of poor judgement, agreed to plead to the Brevard County Commission on behalf of the developer. The Magnolia Bay development was being opposed by the upscale River Falls neighborhood to the north on what I believed were unfair grounds. Thus my misguided appearance at the Commission meeting in which I was passionately villainized by the neighbors as a proxy for the developer. In retrospect, I regret supporting the development because of the unintended consequences to so many people. My only compensation was an attaboy from the developer. He won his case and the condos were built with the concession of one less story on the building closest to River Falls. The finished development is beautiful but many lives were changed to make way for it. Sorry, Gary, Sam and all the unnamed others. Here is my post from 2013 quoting the original from 2007. 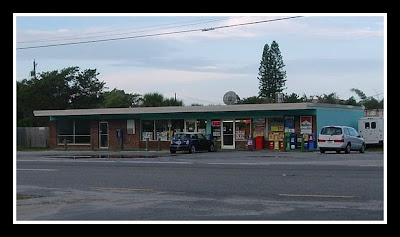 My favorite Express Grocer memory will always be the sign that appeared on the door one day. It read:
Do not ask Gary for credit. He is not allowed to give it anymore. Sam

Posted by Larry Walker at 1:42 PM No comments: