You Want How Much? Really? 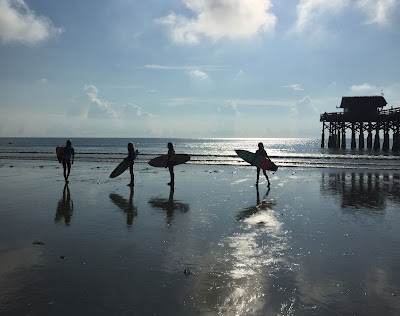 Sorry for the time between posts. The new year has gotten off to a busy start here in the home of Florida surf culture. Thanks to Pam Werneth for the awesome shot of the girl surfers at the Pier. These girls not only rule in the waves but also rip on their skateboards. For me, this shot epitomizes life growing up in Cocoa Beach. Kids in the surf and riding skateboards to school. Many of you Cocoa Beach locals know Pam and her jewelry. If you don't, check out her very hip creations at JewelrybyPam.com

At least one of my hopes for the new year has been realized, more inventory of properties for sale. In the two weeks since January 1 there have been 66 new condo listings in Cocoa Beach and Cape Canaveral. Not surprisingly twelve of those already are under contract. Our total condo and townhome inventory in our two cities stands at 261 units this morning, 19 of those yet to begin construction. That's the highest number of units for sale since May 2014. None of those are short sales and only five are bank-owned.

Single family home inventory remains very low with only 56 properties for sale right now. None of the 56 are short sales or bank-owned. We've only had seven new single family home listings this year and four of those are already under contract. I don't know if Snowman is still out there but I think we can put to rest once and for all his impending flood of listings from the banks' shadow inventory.

I expect the supply of new listings to continue barring some unforeseen event. Demand is strong and prices have not run away. Prices for most properties are still well below the highs of 2006. Example, direct river Harbor Isles 2/2 units. Two closed in 2006 for $290,000 and $335,000. Prices declined and at the bottom, five units closed under $150,000 between 2011 and 2013 and have been gradually increasing since. One of those five was totally remodeled and resold last year for $259,000. There is a new listing this morning of a nicely remodeled unit for $238,000.

Those looking to purchase have a decent supply to choose from depending on criteria. If the criteria are weekly rental direct ocean condo with three bedrooms, there are only two to consider. If the criteria are east facing direct ocean above the ground floor with at least two bedrooms and two baths, there are 31 possibilities between $2.386 MM and $350,000. [For the record I didn't include Mystic Vistas units as the row of townhouses between those buildings and the ocean keeps them from being "direct ocean". Shoot me. For the same reason I excluded Conquistador units in the building on the west side of Ridgewood. Hardly direct ocean although some are described as such in the MLS. If the price seems too good to be true for a direct ocean unit it almost always is. Listing agents tend to go with what has been allowed in the MLS in the past and Conquistador west building units and everything in Villages of Seaport continue to be listed as oceanfront although, in the case of some Villages units, over half a mile from the beach.] OK, back to the 31 units matching my search. At least a third of them are ridiculously overpriced. About half are fairly priced or within striking range of what I consider fair value. There is a handful that I consider bargains at current asking and two that are fairly priced trophy units. Contact me if you need a hand separating the good from the bad and the ugly.

I've had some interesting encounters over the last two weeks that I'll share in an upcoming post. I have also had the pleasure of working with three outstanding listing agents this week. I often bash poorly performing listing agents here and will continue to but I need to recognize good performance when I encounter it. Without naming them, there are three ladies from south of Patrick who went above and beyond to help sell their respective clients' properties. Your efforts are appreciated. For the agent in Cocoa Beach who forgot to mention to the tenant that we were showing the unit, not so much. I reluctantly also offer congrats to the Crimson Tide. Whatever.

"Some people are born on third base but think they’ve hit a triple."
___Mark Kingwell