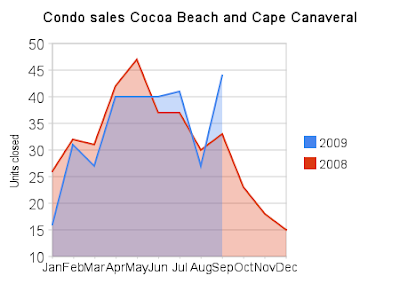 A 7th floor, 3/2 Crescent Beach Club in south Cocoa Beach closed for $325,000 which bumps the comps down slightly for that building which is well into a major and very expensive concrete restoration project.

Harbor Isles was on fire in September with five closed sales. Not surprisingly, the ever-present Betty Siegel was involved in three of those sales. Looking back over the stats for the year, there have been ten MLS sales in Harbor Isles. Of the ten, my office has represented one or both sides of eight of those transactions with Betty being involved in six. You go, girl.

Another Hacienda del Mar direct ocean 2/2, 4th floor with garage sold for $248,500. It was in original condition.

I was able to close a short sale at Cape Winds of a direct ocean ground floor 2/2 with the wide patio for $210,000, a new low for direct ocean units in this very popular complex. With this sale and two other pending short sales there, the other overly optimistic sellers will now have to come to terms with the new reality.

In head-scratching news, in a year in which a total of only 20 units have closed for over $500,000 ( half of those at The Meridian) eight pre-construction units in an unbuilt oceanfront building in south Cocoa Beach popped up on the MLS this week at prices from $800,000 to $1,050,000. The same developer is offering 16 other units in four different completed new buildings on the MLS, most or all having been reduced substantially in price. A+ for optimism.

Fishermen, the mullet run is back on in force. There are acres of mullet moving south along the beach with packs of predators in attendance. This is the best time of year for fishing from the beach with opportunities to catch snook, Spanish mackerel, bluefish, kingfish, trout, redfish and tarpon among others. Take advantage if you enjoy fishing but, whatever you do, enjoy October for all the other reasons that make this month my favorite of the year in Cocoa Beach.

"As my memory rests but never forgets what I lost
Wake me up when September ends."____Green Day

No one the wiser

I often write pieces that never see the light of day here on the blog. The piece that I wrote yesterday and intended to post today will become one of those lost letters. In my next-day read this morning the account appears somewhat inflammatory and would probably have caused some ruffling of feathers and almost certainly some backlash. Perhaps less specific references to the guilty parties will make the story acceptable. Here goes.

There once was a broker who ran a successful real estate office in a cute coastal town. One of the broker's trusty agents found an opportunity to pocket $325 of his client's money in a property management transaction with no one the wiser. The client from whom the money was stolen found out quite by accident a few months later about the theft and confronted the agent. The agent played dumb and referred the client to his broker for resolution. The broker defended the agent and refused to return the client's money. The client elected not to pursue the matter. The larcenous agent continued his career with now-obvious support for his business style and the broker rose to a more prominent position in the local real estate community and continued to prosper. No one the wiser.