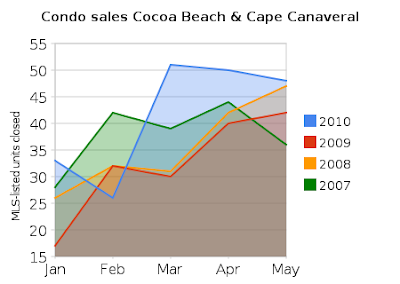 The month of May 2010, with 49 closed sales of MLS listed condos and townhouses in Cocoa Beach and Cape Canaveral, was the biggest May for condo sales in our market since 2006. This has been true for every other month so far this year except February. Only eleven of the total sold for more than $200,000 but only two were for less than $75,000. The sub-$75,000 condo market has been very active in recent months with a big supply of short sales and foreclosures but that supply appears to be drying up as investors have been actively buying those rock-bottom units. In another divergence from the trend, four units closed for over $500,000. I've been talking about the trouble in this market segment for a few years and the recent sales are confirming my predictions that the over-supply had to lead to considerable price reductions before sales would resume. The highest priced sale was a bank liquidation, the 3556 square foot, four bedroom penthouse at the Ocean Club in north Cocoa Beach that sold for $750,000. That's half the once asking price. Get the price low enough and buyers will make peace with a compromised view.

And the fourth of the half-million plus sales was a 7th floor Michelina that closed for $552,500, three and a half years after selling new for $865,000. We have passed crunch time for several new buildings that are sitting dead in the water right now. Either the note holders are going to continue to ignore reality while carrying these buildings (the strategy they've clung to so far) or they are going to have to take the same step that the Ocean Club bagholder was forced to take, keep reducing prices until the buyers are willing to step in. I can think of three new buildings in south Cocoa Beach with zero sold units and several others with less than 50% sold. All of these are luxury units with current asking prices from $475,000 to over a million and, so far, itty bitty price reductions have failed to produce more than a couple of sales. Stay tuned, tipping point approaching.

"How people treat you is their karma; how you react is yours." _____Wayne Dyer