Where to begin? Even though the number of sales in our market in 2009 was up over the previous two years, declining prices meant quite a bit of frustration for those selling and for those facilitating sales. For Realtors, loan officers and title companies, more stringent mortgage requirements and quirky new appraisal rules meant large numbers of failed sales as did the difficulty of consummating short sales which blossomed across the real estate landscape in 2009. When a sale fails to close, there are no pay checks for those facilitators. For sellers, those serious about selling their properties were forced in most cases to accept far less than they had hoped for. One island of positivity in the challenging year was the unexpected surge of sales in the fall. The number of condo sales for the last four months of 2009 in Cocoa Beach and Cape Canaveral was more than 60% above the number in 2008. The abnormality of a fall surge in condo sales is apparent in the chart below of the last three years of closed MLS-listed condos and townhouses. 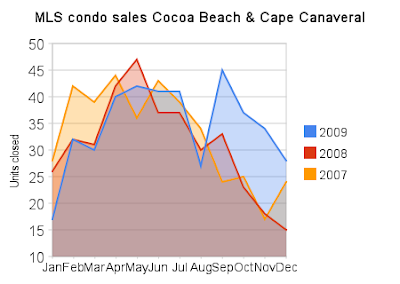 That surge in sales combined with a reduction in new listings contributed to the continued 3-year inventory shrinkage in our market and we are now at almost exactly half the inventory of just three years ago. We are entering 2010 with 647 residential listings on the Cocoa Beach MLS in the two city market including Cape Canaveral. 19% of those listings are listed as either short sales or bank-owned. Hopefully the new year will bring some priced-right new listings. The picked-over listings making up the current inventory are predominately over-priced properties that were overlooked last year in favor of those that were priced within striking range of reality. This dearth of inventory will likely lead to a reduction in sales for 2010 unless some unforeseen event supplies us with easier mortgage money or a lot more realistically-priced listings. If you're looking to buy, be aware of the trend. 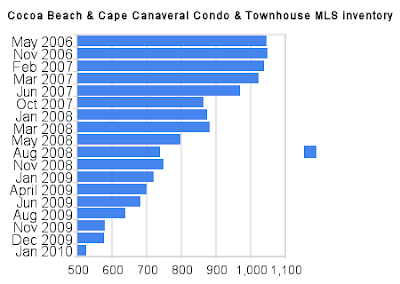 After a brief pause at the end of December, mortgage rates have resumed their upward trend. We have predictions from both camps on the direction for 2010 with those calling for higher rates in the majority. Not good for sellers but very good for cash buyers. 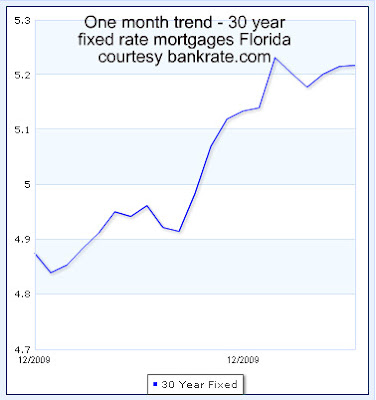 "You're only as big as your battles."___Michael Stipe