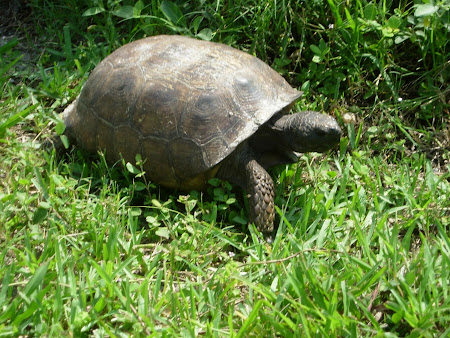 Spotted this gopher tortoise cruising along the dune line at Cape Winds a few years ago. The variety of wildlife that lives in the narrow strip of dune between the beach and the buildings is surprising. We have a healthy population of swamp rabbits, black racers, corn snakes, tortoises, possums, racoons and the occasional bobcat and coyote squeaking out a life in that narrow strip.

Thirty units have closed in the two cities since July 1 at prices between $2 MM and $125,000. Another 46 have accepted an offer since the month began. I would expect the inventory to continue growing as sales activity typically begins to slow as we approach the start of the new school year. Sellers are still pricing optimistically but I am seeing more price reductions as some of them respond to the reality check of an apathetic market. Over 40% of the existing listings have reduced their original asking price. Just a few months ago most new listings were enjoying multiple offers with many selling over asking price. Of the thirty closed units so far this month nineteen of the thirty sold for less than asking price. Sellers, take note; the market is different than it was two months ago and the new reality is more competition, fewer buyers and tighter conditions for condo loans. With the busy months of hurricane season fast approaching, the time to play chicken with the market is behind us. Anyone hoping to sell a residential property here would be well-advised to accept the market changes and make a plan to sell that works with the new reality. The strategy that worked well earlier this year when there was less inventory, lower interest rates and a less-stringent condo mortgage questionnaire is not the best plan moving forward.

Buyers, enjoy your new status in the buy and sell dynamic. Those planning to get a mortgage need to understand what will make a condo complex fail the new mortgage condo questionnaire before they offer on a unit. If the complex is older with obvious deferred maintenance or it is primarily vacation rental units, a mortgage may be impossible. An experienced buyer's agent will have a good idea which ones those are. 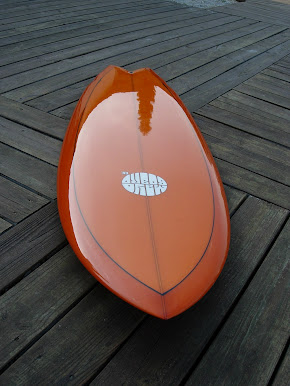 The anticipated changes addressing condo safety are now law. I have inserted the most impactful parts of the new law that will affect condo fees substantially in many buildings. The TL;DR summary: Procrastination regarding structural maintenance and funding of same is no longer an option for pennywise, pound foolish associations.

Condominium buildings 3 or more stories will now be required to have a “Milestone Inspection” within 30 years from date of occupancy, or, if the building is within 3 miles of the coastline (this covers all of Cocoa Beach), the inspection must occur within 25 years, and afterwards every 10 years. Existing condominiums built before July 1, 1992, will need to complete the initial milestone inspection by December 31, 2024

In addition to the association, the inspector's report must also be delivered to the local building official. The association must distribute a copy of the inspector-prepared summary to each unit owner regardless of the findings or recommendations in the report. Any repairs for structural deterioration must be commenced within 365 days after receiving such report or earlier as required by local authorities.

The required “Structural integrity reserve study” is the fly in the ointment for condo fees. For some well-maintained and newer buildings it will have little effect on fees but for buildings with deferred concrete repairs, the requirement to begin funding reserves immediately (or by December 31, 2024 )for a project in the near term will blow up monthly fees. 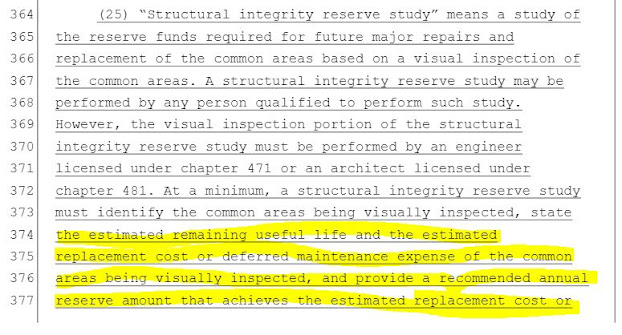 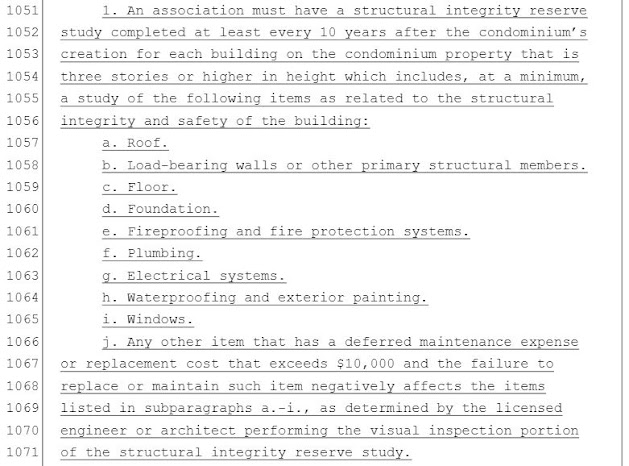 Associations have a little breathing room before December 31, 2024 but if they anticipate that the structural integrity report is going to find needed expensive concrete repairs it would be prudent to go ahead and boost fees by an arbitrary amount immediately to get a head start. I would expect some Boards to wait until the last minute to give some owners time to bail before fees go up.

Interesting fact: the concrete used in older buildings is not the same as modern concrete. I have learned that concrete formulations began evolving rapidly in the 80s and continue to do so today. Newer buildings in almost all cases were constructed with better concrete than our older buildings especially those built before the 80s. Another issue to consider when looking to purchase a beach condo. Knowledge is power.

"It's hard to accept the truth when the lies were exactly what you wanted to hear." _unknown 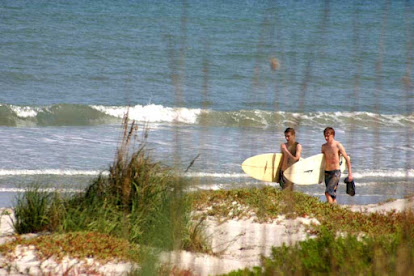 Inventory of existing condos and townhomes in Cocoa Beach and Cape Canaveral stands at 88 units this morning plus another four pre-construction units. Median asking price is $460,000. There are 29 existing single family homes offered with a historically high median asking price of $1,000,000. In addition, there are six yet-to-be-built homes offered for reservation in south Cocoa Beach.

New contract activity has slowed with only 40 condo units contracted in the last four weeks, over half in the first three weeks on the market. Nine single family homes have found a buyer during the same four week period. One notable statistic has been a shift in activity to lower priced units. Thirty of the 37 units contracted in the period were asking less than the current median asking price of $460,000. That illustrates a pretty wide gap between what's for sale and what's selling. Another shift is the number of buyers using a mortgage to purchase. Historically over half of our condo sales have been for cash. Since June 1, only 40% of condo sales were cash deals. That's surprising considering the rapid increase in mortgage rates this year. We had a welcome pull-back in rates this week with the average 30 yr fixed rate mortgage at 5.672% as of yesterday's survey.

My takeaway and observation is that there is a widening separation between buyers and sellers. Sellers in the higher price range above the median are enjoying less buyer interest except in the case of unique properties. Buyers getting a mortgage are looking at a monthly payment that is about 40% higher today than it would have been last year even after the big pull-back this week. Add in higher prices, condo fees and insurance and the climate for continued appreciation is not favorable. Those who are selling and not getting any activity need to ask themselves if this is a typical pause in a hot market or if something has changed and respond accordingly. What the neighbor got for their property in April may not be a realistic benchmark in a changing market. Buyers may still find themselves in multiple offer scenarios for desirable properties but now have the backstop of increasing inventory and cooling demand. The pressure to pay whatever it takes to win is not as applicable as it was two months ago. Best of luck to those looking to participate. Do your homework, know what's happening now with prices and inventory and adjust your strategy and expectations if the current conditions differ with your earlier expectations.

Cocoa Beach commissioners voted 4-1 Thursday to allow Westgate Resorts to build a six-story resort at Cocoa Beach Pier (above the maximum permitted building height of 45 feet) paving the way for the resort and parking garage off Meade Avenue.

"Against profitability, morality is overmatched." _Jay Busbee about LIV golf

Posted by Larry Walker at 8:35 AM No comments: