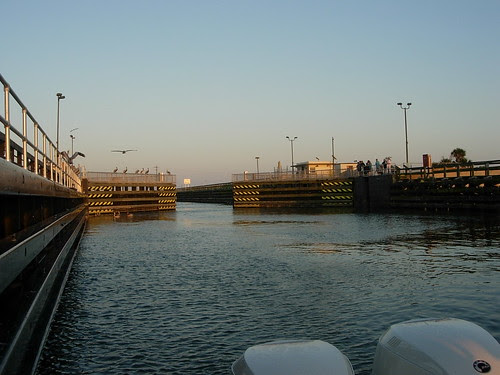 To take the closest route to the ocean by water from Cocoa Beach, Cape Canaveral or Merritt Island, a boat must pass from the Banana River through the locks above at Port Canaveral. The single lock system helps maintain water depth in the Port for the cruise ships and submarines and prevents strong tidal currents, a nice benefit for boaters. For impatient fishermen, there are multiple ramps and marinas in the Port east of the locks.

As of this morning, March 14, there have been 9 closed condo sales in Cocoa Beach and Cape Canaveral posted in the MLS. There was 1 MLS-listed single-family home closed in the same period. Sales of note include the following:

These first three are interesting for their similarities but very different levels of appreciation over the years.

The highest price condo sale of the month so far was a short sale of the entire 2nd floor of Riomar in south Cocoa Beach. This building has only 6 units total with each 3008 sq. ft. unit occupying an entire floor. The upper floors have magnificent views in every direction from the sweep of the beach north and south to Merritt Island across the Banana River. Selling price was $550,000. Sold in 2004 for $740,000.