Hands Up and Kick the Checkbook Over Slowly 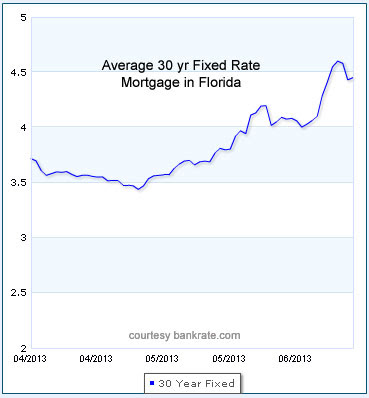 A one-week move of over a half percentage point in mortgage rates caught everyone's attention this week, especially prospective mortgage borrowers. Freddie Mac reported that the average 30 year fixed rate mortgage increased from 3.93% to 4.46% between June 20 and June 27. That's on top of a similar increase already pressuring mortgage applicants since May 2 when the average rate was 3.35%. In the real world that translates to a monthly payment today for a $250,000 mortgage that's $159 higher than just seven weeks ago. A borrower getting a $250,000 mortgage at today's average rate will pay $1908.000 a year more interest than a borrower of the same amount at the average rate in early May.

Will rates continue their upward trend? No one knows but opinions are abundant. I would normally say do your homework and trust your gut but, in this case, the forces moving rates are too big and complex for a peasant like me to comprehend. Time will tell. In the meantime, inventory of condos and townhomes in Cocoa Beach and Cape Canaveral is back down to 275 total units after briefly getting to 330 units earlier in the year. Median asking price is $210,000. Distressed sales make up 9% of those 275 units with only three of the distressed units asking over $200,000.A total of 52 units (12 distressed) are recorded as having closed in June. At that rate we have but a 5.29 month supply of units for sale.

We are firmly in our usual summer pattern of afternoon thunderstorms and calm ocean waters. Temps have not been unbearably warm and the fishing has been good. As is always the case in summertime, the Cocoa Beach Country Club golf course is wide open, uncrowded and cheap. Tee times unnecessary. We haven't had decent sized waves for a while but there has been a constant small background swell keeping the kids and longboarders satisfied. I'll see you outside. Stay hydrated and don't forget the sunscreen. 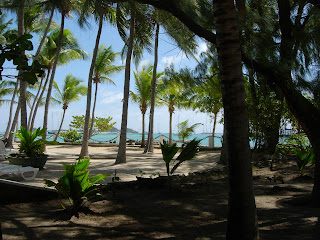 "Insane in da membrane.
Crazy insane, got no brain
Insane in da brain."  ___Cypress Hill
Posted by Larry Walker at 11:12 AM No comments:

Parsing the Trends For Summer 2013 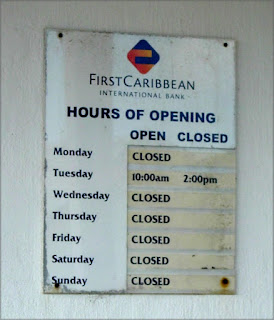 Let's look at the dynamics of the Cocoa Beach real estate market as we begin the summer of 2013. I'm not seeing any significant shifts away from the trends that were already in place. The most powerful force in our market is the continued decline in the number of distressed sales. Of the 61 condo sales recorded in May 2013 only 16% were distressed. We began the year with 44% of all MLS closed condo sales in January 2013 either short or foreclosed. That percentage has dropped every month since. As these distressed sales have disappeared the downward pressure on prices has disappeared with them and we are seeing rising prices again in almost all complexes and neighborhoods. The sellers who were waiting for market recovery to list their property are finally getting their day although probably not as fast as they hoped. Prices aren't rising nearly fast enough. Our depleted inventory still has a large number of listings at optimistic asking prices by these hopeful sellers. That means that, after discarding the over-priced listings, buyers have very few priced-right attractive properties to consider. That dynamic has the fairly-priced, good ones moving quickly. Price a decent condition Cocoa Beach property near the fair market value and it will sell immediately.

One third of the condo sales in May were on the market for less than 32 days and half of the single family homes sold in less than 35 days. Had the other sellers been more realistic with their first asking price that number would be higher. 59% of  condo sellers had to reduce their asking prices before finding a buyer.

The number of purchases with mortgages is rising. As recently as 2010 two thirds of all condo purchases were for cash. In May we were right at 50/50 cash to mortgage for condos and about 2/3 of all single family sales were financed.

As we move through the summer months I expect these trends to continue. For sellers it means that you can reasonably expect to get more than you would have last year but not a great deal. For buyers, expect competition from other buyers for good properties and expect to pay slightly more than you would have six months ago. Thinking of throwing out a lowball on a good property hoping for a steal? Try some other market. It's not going to happen here. Get pre-approved with your local lender so you can include a pre-approval letter with your offer or have proof of funds if you offer cash. As always, good luck in your search. Questions? Email me at larry@walkerbagwell.com or call me at 321.917.5786 I'm happy to help.

Here's the tl;dr version for those with limited attention spans.

Cocoa Beach & Cape Canaveral Real Estate Trends Summer 2013
"Money doesn't solve all your problems but it solves your money problems."  __James Altucher
Posted by Larry Walker at 9:38 AM No comments: