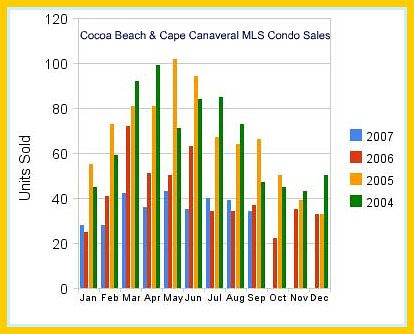 Looking at the sales data in graphic form in the chart above made me realize that, as slow as sales are, they are not appreciably slower than the second half of 2006. In fact, in July, August and September, 2007 sales have exceeded those of 2006. October, with 19 closed sales as of the 26th, also looks on track to at least match the 2006 numbers. Is this a meaningful revelation? Depends on one's perspective. For realtors, lenders, inspectors and the other professions that depend on real estate sales for their livelihood, it means that there is enough activity at the current steady level of sales to survive in a slowed market, at least for some. For sellers of condos, it means that the buyers have not fled the market. They are there and buying at a steady pace. Here's a different look at the same data that graphically demonstrates the seasonal nature of our condo market. It makes it obvious that the fall is the best time to be a buyer and late spring to early summer is the best time to be a seller. 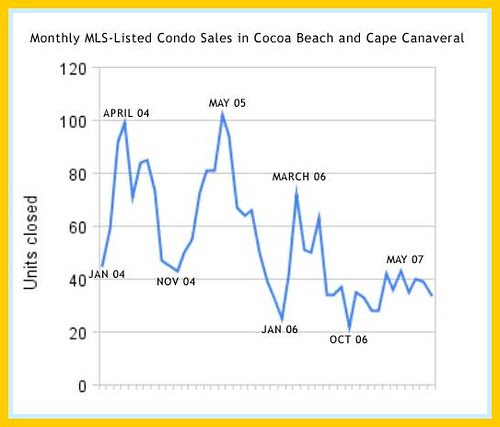 I would like to chart the trend in prices but the MLS data is too confusing to get an accurate picture of that metric. My on-the-ground perception is that the trend in prices is still downward although not spread equally. Some smaller complexes with few or no sales have escaped the reality of lower prices, so far. My office closed 2 sales in The Constellation this week at prices not seen in that building since 2003. With Water's Edge and Stonewood units closing in the last two weeks for $274 and $336 per square foot respectively, the Constellation sale at $170 per sq.ft. tops the list for screaming deal of the month. 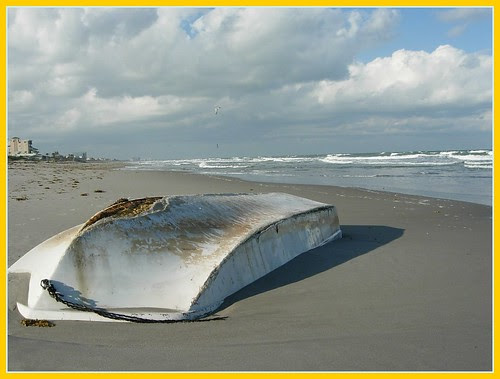 Earlier this month, after a few days of high east winds, this boat washed up on the beach directly behind the Constellation. Judging from the hand-painted name on the hull, it probably came up the Gulf Stream from the islands. I heard yesterday that it was spotted in the surf 25 blocks north. I hope everyone enjoyed yesterday's great waves as much as I did. The water is still warm and the beach is deserted. Fall is a magic season in Cocoa Beach.