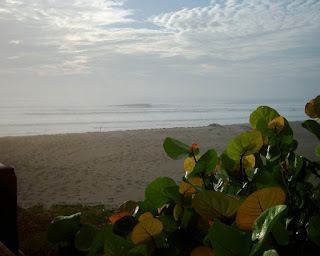 It's hard to believe that it is the last day of the year. 8 AM and it's already 76 degrees and predicted to hit 84 which is 17 degrees higher than the average temperature in Cocoa Beach on December 31. The sky is blue, there is just a breath of wind and there is a small, waist high junky swell for those so inclined. Water temp in the mid-70s so wetsuits aren't necessary or even desirable.

Sales have remained slow since my last post but we have managed to close 704 condos and 164 single family homes for the year in Cocoa Beach and Cape Canaveral. Only 26 of the home sales were in Cape Canaveral but a remarkable 11 of those were in the small neighborhood of Harbor Heights in Cape Canaveral.

In Cocoa Beach we saw the highest price ever paid for a home when the oceanfront Pumpkin Center estate just south of downtown closed for $4,000,000. This estate sits on 200 feet of direct ocean and has over 10,000 square feet in multiple buildings with 11 bedrooms and 13 baths. Contrast that with another direct ocean home in south Cocoa Beach sitting on 50 feet of oceanfront that sold for $675,000. Someone scored a killer deal.

Of the 138 single family homes closed in Cocoa Beach this year, 37 sold for a half million or more. Lowest price paid was $120,000 for a tiny 2/1 cottage close to downtown. Overall median price was $375,000 and a little more than a third were purchased with cash.

Of the 704 condos closed so far over half were purchased with cash, 61% to be exact. Ten percent of the sold condos were bank-owned and 14 were short sales. There were 27 condos closed for a half million or more with the highest paid, $1,250,000 for a top floor southeast corner Meridian that sold in seven days on the market. That price came out to a jaw-dropping $508 per square foot. Unique properties command unique prices. Median condo price was $175,000 and lowest paid was $29,900 for a tiny efficiency at The Plaza in Cape Canaveral.

There are almost certainly dozens of people right now who hope to purchase a direct ocean (east facing) condo unit here in the coming year. Those potential buyers need to have a grasp of what units are worth if they hope to be successful in their quest. Prices paid for the 80 direct units that sold in 2015 ranged from $187 to $362 per square foot (if dropping the highest and the lowest). Pricing by the square foot is inexact but it's usually the best starting point in an exercise of estimating value. The median was $250/sf with only three units selling for more than $300 per square foot. Those properties that sold for more than $250 per square foot were generally newer or nicely remodeled and/or furnished. Buyers and sellers need to remember that their estimate of value, no matter how they arrived at it, is an estimate. The opposing party will almost always have a different estimate. Sales happen only when the two parties can reach an agreement or compromise on that estimate. I hope I can continue in 2016 to help many of you in your quest to acquire the perfect beach getaway in our favorite Florida beach town. A happy, safe and prosperous new year to all. Larry out.

"You are the average of the five people you spend the most time with." ___Jim Rohn