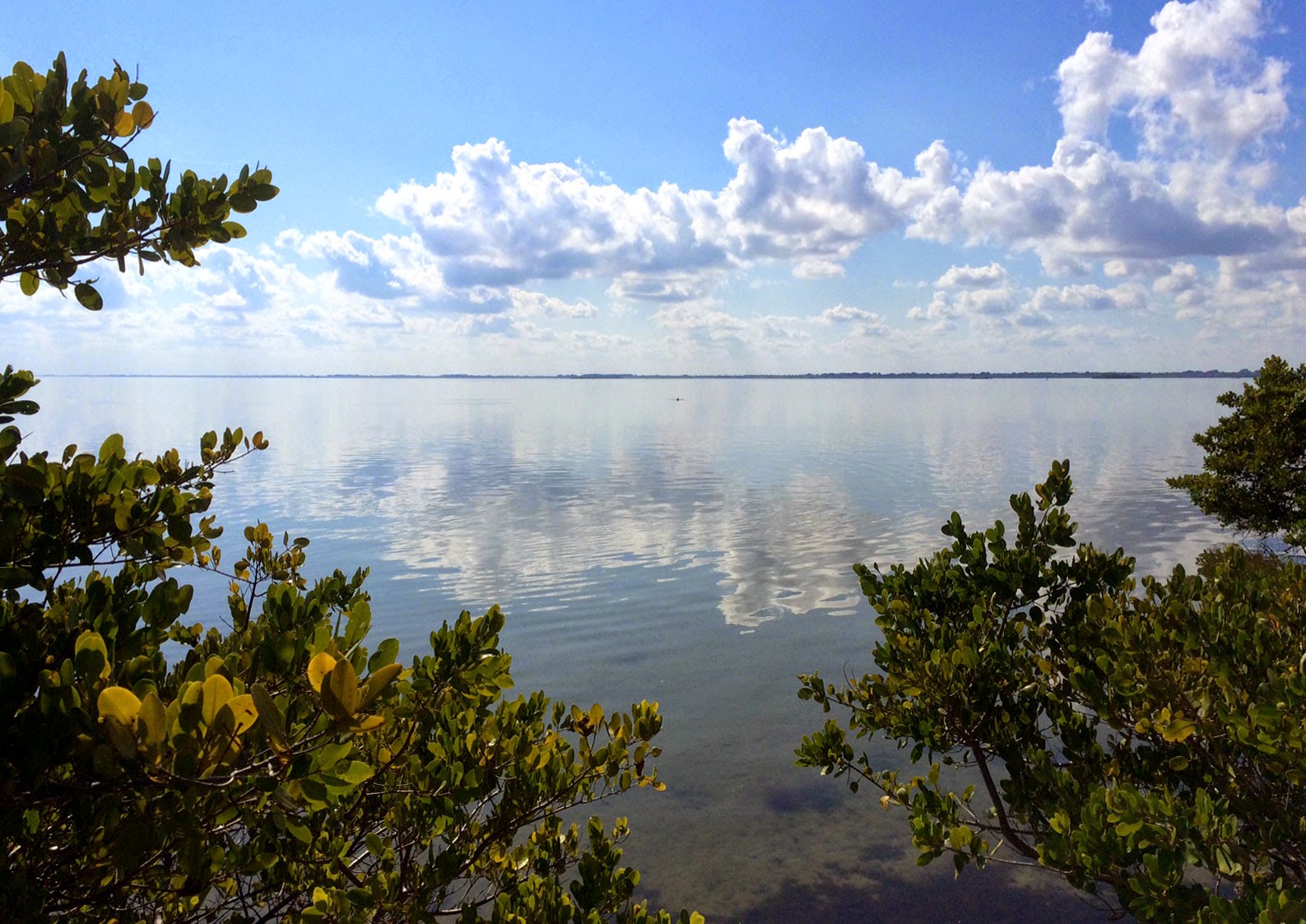 2014 was an eventful year in Cocoa Beach. I had forgotten how much had happened until I began listing the significant events of the year. I know I may have missed some but these are the ones I can remember that felt worth mentioning.

The picture at the left was taken from the golf course at the Cocoa Beach Country Club on December 20. Temp was in the high 70s at the time. It was a carbon copy of every day of the entire preceding week. By the way, how about those new greens? It's been a couple of years since they tore out the old ones and replaced them with new, salt-tolerant Paspalum grass. They were better than the old very quickly but now that they have completely filled in, they are excellent and, according to one old-timer who plays all over Brevard, might be the best in the county. Kudos to the people who made the decision to undertake this disruptive project and who chose the type of grass to use. It has paid off wonderfully.

Some of the Highlights of 2014

Our new fire station is almost finished directly across the street from the old station which is slated for tear-down. Imagine the Chili Cook-off next year.

The Pelican Landings Resort in south Cocoa Beach was sold and torn down to make room for a magnificent new oceanfront home, a rare case of natural density reduction. It was completed late in the year.

We saw the highest price ever paid for a single family home in Cocoa Beach this year. It was for a 13 year old luxurious, three level direct ocean beauty for just shy of $2 million. That record is soon to be more than doubled when the pending Pumpkin Center oceanfront block closes.

And once again, as we've done for the last six years running, the number of closed residential sales exceeded the preceding year. The over 670 condo units closed in Cocoa Beach and Cape Canaveral (as of Christmas) exceeded the total for every year since 2005.

The final chapter of the Glass Bank saga was begun late in the year as preps for demo began.

The new oceanfront condos on the site of Crawford's Cocoa Cabanas in south Cocoa Beach finally broke ground after first being announced back in 2006 just as the housing crash began. I've been hearing ever since then that construction was about to begin. They are being offered with "boat slips". Caveat emptor.

After voters overwhelmingly supported mixed-use zoning in a small area of downtown Cocoa Beach in 2011, we saw our first two new mixed-use buildings completed, residential upstairs over commercial downstairs. I think we can expect many more of these types of buildings downtown. Also downtown, we saw several other commercial buildings remodeled and re-purposed and several new restaurants, offices and watering holes opened. The old Post Office was sold and remodeled and has reopened as retail and offices.

The Port continued it's blazing pace of growth. The old boat ramps next to Grills were closed to make room for the new Cruise Terminal One which is almost complete. We recreational fishermen scored on this one as we got brand new ramps much closer to the Port entrance adjacent to Jetty Park. The container port appears to be either complete or close to it. The main channel of the Port near the entrance has been widened to allow two cruise ships to pass one another. Next on the agenda there is to turn the area around the Exploration Tower into something like downtown Disney. The conceptual renderings are breath-taking. We've come a long way since Captain Ed's and the scallop plant.

SpaceX completed several successful missions from the Space Center as did the other usual players. The big launch of the year was a massive Delta 4 Heavy in December carrying the Orion space craft. There are a dozen launches scheduled right now for the next eight months from the Cape, seven by SpaceX and five by the United Launch Alliance. The space flight business is firing on all cylinders (nozzles?).

And, while not Cocoa Beach news, the online real estate world experienced a couple of major moves with Zillow buying Trulia and News Corp. buying Point2 and Move, Inc. so that they now own, in addition to Realtor.com, the pipeline for the vast majority of Zillow and Trulia's listings. This one ain't over by a long shot. I can't wait.

We are entering 2015 with an inventory of 257 condo and townhouse units for sale and 60 single family homes.That's about a 4.5 month supply at 2014's rate of sales. Considering this, I think it's reasonable to expect the number of sales to decrease in 2015. There are a total of five short sales and 24 bank-owned properties for sale in Cocoa Beach and Cape Canaveral. That scarcity of distressed sales combined with the low inventory should be a tailwind for continued rising prices. As always, buyers should be aware of market conditions and recent selling prices and be realistic if they hope to purchase. Prices have risen but are still less than the cost to build in many cases. There are gems to be had. Good hunting.

Happy safe holidays to all and a positive and gratifying New Year.