If it's not working, just bang on it harder 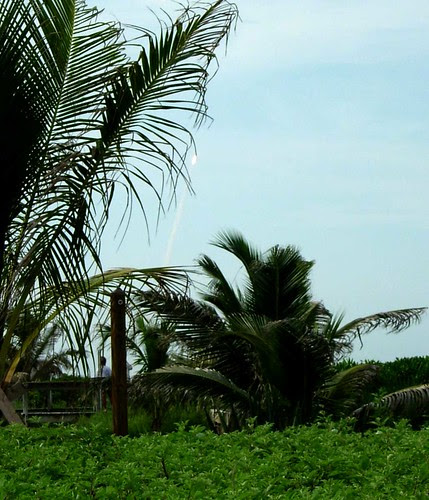 This week's launch of space shuttle Endeavor as seen from the backyard.

Those of you who get my direct updates will be interested to know that both the Coral Sands and Constellation oceanfront listings that I mentioned recently as attractively priced have accepted contracts after 11 and 4 days on the market respectively. Price it right and they will come, even in a crappy market. Apparently the concept of pricing to sell escapes the seller of the oldest listing in our MLS. The unit is a 2/2 riverfront condo in Cape Canaveral that has been listed for a remarkable 1512 days since May 2005. The listing is now at 57% of the original asking price and the commentary actually describes the seller as "motivated". Not surprisingly there is not a single photo of the unit on the MLS, just three exterior photos of the complex and no showing instructions. Even after four plus years chasing the market down and reaching the "motivated" state, this unit is still priced $25,000 higher than the lowest priced identical unit currently offered in the complex. Between slack listing agent and overpricing, this unit is at the center of a perfect storm of bad decisions that look to extend it's time on the market indefinitely.

With a similar time line, a Shorewood unit in Cape Canaveral finally closed this week after 1158 days on the market. It sold for 51% of it's original asking price in April 2006. An early price cut might have saved this seller six figures. Two other "priced-right" listings have closed this month after less than two weeks on the market. Both closed for 90% of asking price. Yin meet yang. A total of 16 properties have closed so far in the month of July in Cocoa Beach and Cape Canaveral, only one for more than $310,000. Our inventory of condos stands this morning at exactly 666?! It is a devil of a market after all.

Bonne chance to all sellers out there as we ease into slow season. Be aware that the competition for buyers will be intense from this point until New Years. Conduct your negotiations and decisions pertaining to pricing accordingly. Buyers, read the previous post, Self-defeating games.