Going for the gold

Multiple offers have become the new normal in our market. I submitted an offer on a short sale Cocoa Beach canal home last week. There were 12 offers in the first five days with $10,000 above asking not being enough to win. Of four houses I planned to show yesterday two had contracts between Thursday and Friday, one of those receiving three offers. A third of the condos closed so far this month in Cocoa Beach and Cape Canaveral and almost half of the single family homes were on the market less than a month before going under contract. A couple of things are contributing to this. There seem to be a lot of buyers who were waiting for prices to bottom or stabilize who have now begun actively offering on properties. Add that increased demand to the depleted supply and, Voila, multiple offers on any new offering that's priced right.

Another shift in activity is increasing numbers of condo sales in the higher price range. In the first three months of the year 19 condos closed for more than $300,000. Since April 1 we've seen 29 closed units over $300,000 with eight of those over $500,000. Meridian has been a large part of that activity with seven units selling in 2012, all over $520,000. Other active luxury buildings in 2012 include Constellation and Villa Verde with five sold units each and Magnolia Bay with twelve.

This morning there are a total of 291 MLS-listed condos and townhomes for sale in the two cities and a mere 47 single family homes. Those looking for a river or canal home in Cocoa Beach have but 21 from which to choose. Lowest price for a livable waterfront home is $261,000 for a tiny 3/2 with a view of commercial property across the canal. Of the total residential inventory (condos and homes) 12% are either short sales or a foreclosures. That number was 56% two years ago.

We experienced a pleasant weather phenomenon yesterday, one that happens every so often in the summer. After a few days of west winds the warm surface water near the beach is pushed offshore and the cold water underneath moves in to take its place. The result for us is natural air conditioning as soon as the sea breeze kicks in. While the rest of the state and country was sweltering we were enjoying a cool breeze in the low 80s off the ocean under beautiful blue skies. The photo at the top was from last week, another normal weather pattern for us in the summer, afternoon thunderstorms. Eight more days until lobster season.

"Stay thirsty my friends." __The most interesting man in the world 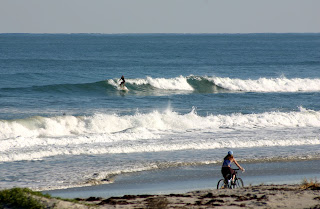 Earlier this year real estate grunts were pleased to hear that some of the big banks were going to streamline their short sale approval process. This was welcome news to me as dealing with the prolonged, nonsensical short sale process is one of the most frustrating parts of a buyers agent's life. Alas, it was not to be, at least not the intended result. The process may have been streamlined somewhere behind the lenders' curtain but out here on the front end, the period from contract to closing appears to be taking longer than ever.

I pulled stats for all closed residential short sales in Cocoa Beach and Cape Canaveral since May 1, 2012. There were 21 short sale condos, townhomes and single family homes closed in the period. Two of the 21 were previously approved and both closed in one month from contract date. Of the remaining 19 sales, the average time from contract to closing table was 118 days. Longest time was 270 days and shortest for a not-previously-approved sale was six weeks. Half took four months or longer.

Best case scenario for a buyer hoping to purchase a short sale is to find a property with an approved price that another buyer has walked away from. In the event of an unapproved sale, be prepared to wait for months often with no progress reports along the way. Buyers and their agents are at the mercy of the listing agent and getting status reports from some of them is akin to pulling teeth. I am in the fourth month on one short sale right now. Contract was submitted to the listing office first week of March with proof of funds with the contract which is normal with a cash offer. Six weeks later they informed me that "we are getting there" and asked for a more recent proof of funds. One month after that I am told "we are moving in the right direction". I ask if there is something more specific I can report to the buyer. Answer: "Yes, Once a processor has been assigned (next week, hopefully), the end will be in sight." One week later (eleven weeks in) I get a message that the BPO is being done. Five weeks pass with no contact from listing agent. I ask for another progress report. Listing agent informs me (16 weeks since initial contract) that she was told by the title company that we "should" be there in another 45 days.

As always with short sales, we're ready to close but our search for a property continues while the bank picks its nose.

"Not all information is beneficial." _____Ben Bernanke
Posted by Larry Walker at 10:37 AM 1 comment: 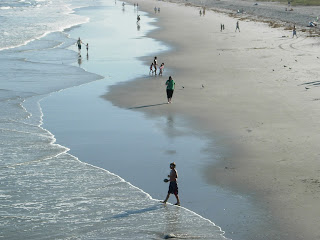