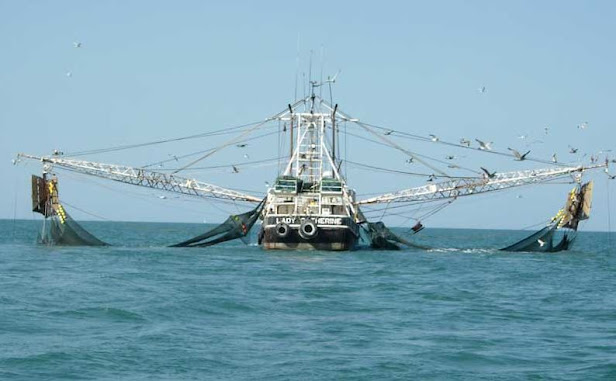 Real estate sales in 2021 in Cocoa Beach and Cape Canaveral are already in record territory and by the time the year is finished we look to have recorded the highest annual residential sales in history, eclipsing even the bubble years of 2004 and 2005. Here is a look at sales of all years, since I began keeping records in 2004, as they stood through the month of August. 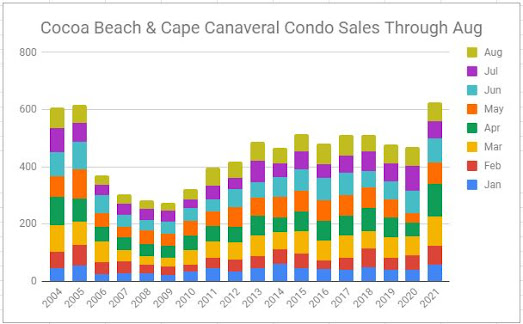 The month of March 2021 set a new all-time monthly record for condo sales in our two cities with 103 units closed. That record was broken immediately in April when 113 units closed. That we've done this with the lowest inventory in history is nothing short of incredible. For context, condo inventory in 2004 and 2005 was hovering between 700 and 1000 units for sale. On January 1, 2021 inventory in our two cities was at 113 existing units for sale and dipped as low as 35 units for sale a few months later. We've closed more units most months this year than the average number for sale during the month.
Prices, likewise, have been record-setting. Here is an excerpt from one of my posts in 2015:
Prices paid for the 80 direct units that sold in 2015 ranged from $187 to $362 per square foot (if dropping the highest and the lowest). Pricing by the square foot is inexact but it's usually the best starting point in an exercise of estimating value. The median was $250/sf with only three units selling for more than $300 per square foot. Those properties that sold for more than $250 per square foot were generally newer or nicely remodeled and/or furnished.
By comparison, in 2021 we have closed 95 direct ocean units so far at prices between $228 and $519 per square foot (dropping the high and the low). The median was $339/sf with 71 of the 95 selling for over $300 per square foot and 18 of those over $400/sf. Prices have been in uncharted territory for all of this year and are still climbing. Buyer appetite is still strong although we are going through typical fall slowdown in activity right now. Sellers are playing hardball and buyers are competing with one another for good properties. Multiple offers are to be expected on any desirable property. Knowing that some buyers are willing to knowingly overpay in a rising market will be beneficial knowledge for buyers who find themselves in multiple offer situations. Buyers and sellers need to remember that their estimate of value, no matter how they arrived at it, is an estimate. The opposing party will almost always have a different estimate. Sales happen only when the two parties can reach an agreement or compromise on that estimate.
Speaking of multiple offers, a Sarasota listing agent is in hot water after being accused of presenting multiple offers in a biased manner to favor a buyer who also happened to be his customer, a fear every buyer harbors when notified of multiple offers.
I managed to slip away with a friend and put a few snook in the boat this week with Capt. Travis Tanner. All but two slots were oversize and released unharmed to continue to terrorize the mullet schools streaming through the Port. The snook will be following those schools into the ocean as the annual mullet run heats up and they move southward down the beach. Beach anglers fishing the trough right off the beach with artificials or live mullet in Cocoa Beach and Cape Canaveral will be catching their share of one of the best-eating fish in our waters. Fish must be at least 28" and no more than 32" in total length to be harvested. All others must be released unharmed. Skin your fish if you don't want to ruin the taste. Good luck to all.

“The Party told you to reject the evidence of your eyes and ears. It was their final, most essential command.” __George Orwell 1984

Posted by Larry Walker at 9:00 AM No comments: