Looking up the channel along St. Croix from Fountain Cove.
Merritt Island in the distance and Banana Bay on left.

Like Lisa Simpson, when I see any of the above or similar phrases in a real estate listing I usually yawn and say, meh. However, it's the last weekend of summer, seller sentiment is changing and the headline "REDUCED!" is starting to mean something. When I sift through the 129 price reductions on condos and townhomes in the month of August in Cocoa Beach and Cape Canaveral I'm seeing some serious price drops unlike the, mostly, baby step reductions earlier in the year. The pressure of the end of the summer season is apparently being felt and some of the reductions are significant. For example:

I don't consider all of these to be good buys even at the newly reduced price but the amount of the drops tells me that the shift in seller mindset is speeding up in it's move towards acceptance and away from denial. Even with the highly picked-over inventory I suspect that the next few months will present opportunity for ready buyers. I would suggest, if you are going to be using a mortgage, that you go ahead and make contact with your lender before you start pursuing a deal. The rules for condo mortgages continue to change and you'll have more bargaining strength if you're already approved or paying cash. If you were pre-approved more than a couple of months ago, you need to talk to the lender again. Things have changed, yet again.

As of today, the Cocoa Beach MLS is showing 24 closed condo and townhome units in the month of August in Cocoa Beach and Cape Canaveral, well below last year's 39 sold units with nothing closed under $500,00. The number may drift up slightly as tardy listing agents update their listings next week. Hope you have a fun Labor Day. Be safe and close your shutters when you leave.

Posted by Larry Walker at 2:52 PM No comments:

Noon:Thursday - The rain has stopped and the water is starting to recede although the river may take some time to go down. Kids will likely have to return to school tomorrow after this unplanned three day holiday and I'll return to my normal real estate related postings. As you can imagine, there has not been much activity since Fay first arrived on Monday. Live long and prosper.
Posted by Larry Walker at 9:01 AM No comments:

" I look at a hundred deals a day. I pick one." Gordon Gekko
Posted by Larry Walker at 8:56 AM No comments: 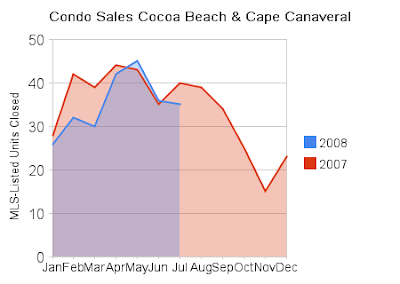 "I have known a vast quantity of nonsense talked about bad men not looking you in the face. Don't trust that conventional idea. Dishonesty will stare honesty out of countenance any day in the week, if there is anything to be got by it. "
________Charles Dickens
Posted by Larry Walker at 9:22 AM No comments: