Must Be Potty Trained - Oh No, You Didn't 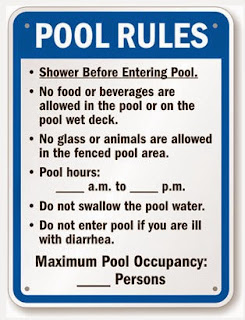 Your condo's pool rule sign is almost certainly discriminatory. When I first moved to Cocoa Beach 25 years ago I became the go-to sign guy for the community. During a ten year run before hanging up my cleats, among the thousands of signs I made were pool rule signs for most of the local condo complexes. Some consisted of just the mandated rules by the State of Florida shown on the sign pictured (note that pools larger than 200 square feet also require NO DIVING in at least four inch letters which really screws up the layout). Then there were the associations that took a little more hands-on totalitarian tone with their posted rules. I've made pool rule signs with over two dozen rules and came to realize that a condo association's personality could be revealed by the number and tone of their pool rules. Prospective condo buyers, this is a LifeProTip. Check out the pool rule sign at the complexes you're evaluating. If you see the words "horseplay" or "jean shorts" or "long hair on men" or anything relating to profanity or music, a more in depth look at the personalities in charge might be in order. Not everyone wants to live in a community that prohibits horseplay. I pissed off more than a few condo commandos by suggesting that instead of listing their 20 additional rules we could simplify things by just adding a single "NO FUN" rule. I don't remember that suggestion ever being received gracefully.

I now know that many of the rules included on some of the local pool signs are discriminatory and in violation of The Fair Housing Act. Condo commandos reading this, it might be prudent to check your sign and have any discriminatory rules removed before another reader that you may have bullied seizes the chance to return the grief. If you have any rule that begins with "Children" or "Adults" you are almost certainly in violation. Here's a good article by an attorney on the subject. By the way, "NO FUN" is not discriminatory nor a violation. Maybe its time as the alpha rule has come.


"I'm not afraid to look like an idiot."  ___Anthony Bourdain