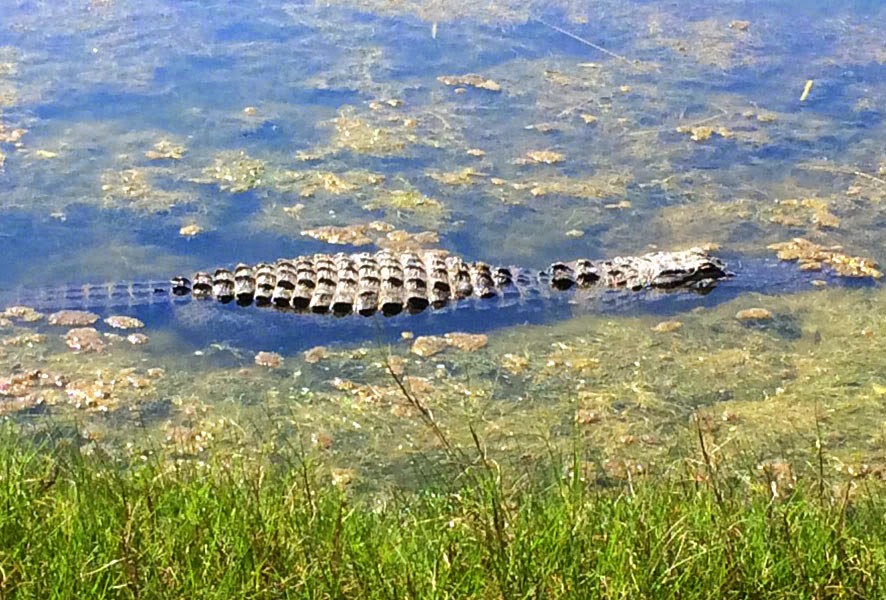 Icebergs and alligators; the greater danger is usually hidden beneath the surface.

And just like that, the season is over. Easter Sunday began early with crowds on the beach in several places for sunrise services. The weather cooperated with perfect conditions as the sun rose into a clear 71 degree sky as the full moon set over the Banana River.

March 2015 in the Cocoa Beach real estate market was, without exaggeration, gangbusters. There were 73 closed condos and townhomes in Cocoa Beach and Cape Canaveral and 15 single family homes. Eleven of those were distressed, short sales or bank-owned. Another 96 properties that haven't closed yet have gone under contract since March 1, twelve of those distressed. For sale inventory this morning is scary low in condos with only 236 condos and townhomes left for sale in the two cities. Single family home numbers are a little better at 72 listings. Only 7% of the total for sale listings are distressed.

On a side note; many of the current listings are way over-priced. This is more true with oceanfront condos than any other property type. To the 18 aspiring record setters out there priced above the highest recent $/sf sale, consider that only two units have closed in the last six months for more than $300 per square foot and both of them were super-nice units in luxury, newer buildings. All 18 of the units priced above the highest one are beautiful and desirable but all 18 of the sellers are going to have to modify their expectations if they really want to sell. Those dreaming of over $400 per square foot will have to be content with dreaming. I guess you can't win the lottery without buying a ticket. Asking $400 per square foot for any oceanfront condo in Cocoa Beach in 2015 has about the same chances of success as buying a Powerball ticket. Not impossible but pretty close to it. Fully a third of these pie-in-the-sky sellers are in the same building. They are apparently reinforcing one another's impossible dreams. Talk around the pool must be interesting;

"Any nibbles on your unit?"
"No written offers but several showings and feedback has been good. You?"
"Same. We might raise the price after Easter. Larry says market is on fire."
"Yeah. Us, too. Did you see what Remrem is asking for his? We might be too low."

I get asked why an agent would take an impossibly over-priced listing. Sometimes, it worth having a too-high listing at a busy spot just for the sign exposure. In 2015 there are even better reasons not to decline an over-priced listing. With the recent evolution of online real estate, every listing an agent has generates traffic and inquiries from several dozen real estate websites. It can be good for a listing agent to have over-priced listings if she can sell other fairly priced listings to the inquiries she gets from Zillow et al for the too-high ones. Don't count on a listing agent to refuse a listing because it's too high. It's still good for business. Sellers who want to sell need to know what the market has recently been paying for comparable properties. If they price accordingly they can expect to pick up a check in a reasonably short time. If they ignore the comps and list for a crazy over-the-market number, at the very least they get to enjoy the fantasy of their unit being worth $too-much (around the pool). A check, however, will not be forthcoming.

Whether you're buying or selling, if you'd like an idea what a property is worth right now, I'm happy to give you my opinion. I'm not an appraiser but I am an involved market participant and a committed statistician who has been studying, slicing and dicing our small market for many years. I know this market like very few.

While I wasn't paying attention this blog had it's tenth birthday last month. Since March 2005 I've published 509 posts (and written a few dozen others that didn't make the cut for whatever reason or controversy) and we've had 293,211 visits to the blog, half of those in the last three years. The Cheerleaders and Bad Haircuts post warning about NARs ill-timed, self-serving Time2Buy campaign in 2007 has been read 1434 times making it the most read post of all. Thank you to all who've read, commented and/or emailed over the years. I've enjoyed it all. Plenty more to come. It's probably time to ruffle some feathers again.

"Remrem is a fine soldier and a gentleman but a cubit of his company can stretch a league."  ___Wilbur Smith from Desert God. [Apparently chatterboxes are not a modern phenomenon.]