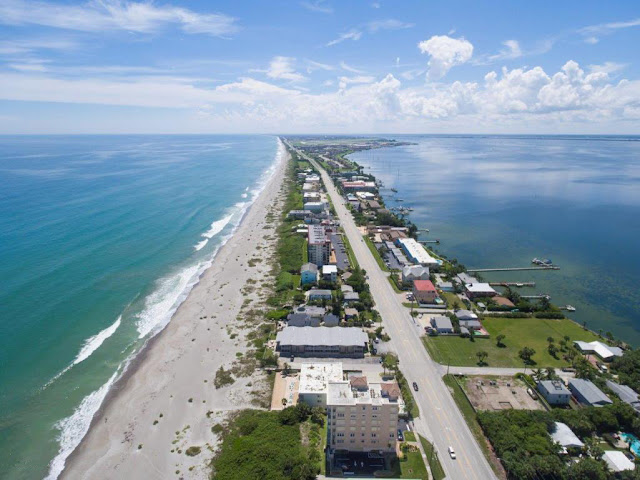 Outside the city limits looking south over unincorporated south Cocoa Beach towards Patrick Air Force Base where the land widens in the distance, Banana River on the right, Atlantic Ocean on the left. Now you know.

Following up on my recent post, When There Are No Comps, I'd like to explore the trustworthiness of comps a little more. An oceanfront condo sold recently in south Cocoa Beach for what seemed an unbelievably low price. It was a private sale and not on the MLS. I saw the contract. Written in the contract was a line that the purchaser would get use of the unit for the months of January, February and March free of cost for life. Sounds crazy since by buying the unit the purchaser gets exclusive use of the unit anyway. It was a tactic to defeat the first right of refusal process in this particular condo complex. It was intended to make the contract unattractive to any owners that wanted to exercise their right which would have been sure to happen since the price was so low. I feel fairly certain that the sales price on this contract did not accurately reflect the actual amount of money that changed hands. By writing the odd clause in the contract, the seller defeated the first right process  AND, if the contract price was indeed lower than the actual money changing hands, reduced his capital gains tax liability and the purchaser's  property taxes going forward. A win for both parties to the fraud but not for other taxpayers and other owners in the complex whose units now appear to be worth less than they really are.

I am aware of another unit in Cocoa Beach, also a private sale not on the MLS, that is due to close shortly that will likely record for an amount less than the actual selling price. Any Realtors or appraisers using it or the previous sale for comps will be using flawed information and will not get an accurate estimate of whatever property they're trying to value.

This works in the other direction as well. Developers are fond of propping up the comps in a new development by issuing credits to buyers at closing. I've seen "decorating credits" of up to $75,000 issued to a buyer of a new condo unit. That sale may have recorded at $600,000 but with the cash back to the buyer at closing the actual price was $525,000. A seller a year down the road may reasonably think his unit is worth $600,000 plus some appreciation. As long as the new buyer isn't aware of the unrecorded credit or the giant bonus [bribe] paid to the first buyer's agent he may willingly pay $600,000+.

This brings up an interesting point. If sales after the developer's departure reflect the inflated recorded comps as true then the initial deception becomes reality. This is actually the case at one very popular luxury complex in Cocoa Beach. There is another luxury complex in Cocoa Beach where a good number of the post-completion sales were by the developer and entities that he controlled. Several of the recorded sales involved property swaps and other off contract compensation that make selling prices seem far higher than they actually were. Private sellers in this building can't figure out why they aren't able to get any action at their asking prices which seem in line when compared to the bogus recorded prices.

Comps are only as good as the veracity and completeness of the information contained in them. Agents rarely make notes on closed sales that the entire contents were included in the final price or that commission was reduced or that the owner is getting the month of March free for the next five years. All those things affect the actual price paid. In the end it is prudent for all parties to a transaction to realize that comps are just part of the story and that there are often details that will never be known. CMAs and appraisals are only one person's opinion of value and that opinion is often formed with incomplete and/or inaccurate data. Proceed accordingly and don't lose a deal because of an opinion of value that might be flawed.

"False opinions are like counterfeit money, printed first by guilty men and thereafter circulated by honest people who perpetuate the crime without knowing what they are doing." ___paraphrased from a quote by Joseph de Maistre

Posted by Larry Walker at 6:37 AM No comments: