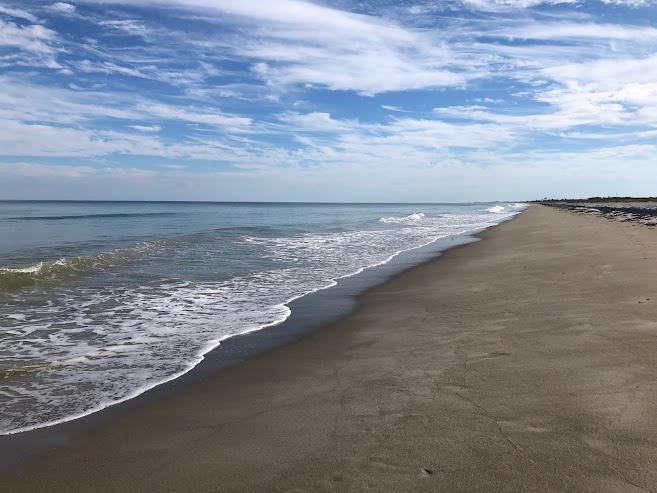 Typical October beach crowd in south Cocoa Beach
The Cocoa Beach and Cape Canaveral MLS today is reporting 740 sold condo and townhome units in our two cities since January 1. Somehow, the monthly sales average (74 units) has exceeded the inventory almost the entire time (65 units for sale this morning). In addition to record numbers of sales, prices have been in record territory all year and continue to steadily climb. There have been 177 condo units closed for over $300 per square foot with 36 of those selling for more than $400 a foot. Despite the high prices on many properties there are a few units selling for less than their price at the peak of market mania in 2005.
There have been 145 single family homes closed in our two cities so far this year, 27 of them over a million dollars. Among these 145 sold homes are seven million-dollar houses that don't exist but have been reported as closed in the MLS. They are supposed to be on a riverfront parcel in south Cocoa Beach but so far there are only a few piles of dirt where some of these ghost houses closed six months ago. There are 24 MLS-listed houses for sale this morning in Cocoa Beach and Cape Canaveral including seven more of the previously mentioned ghost houses offered as pre-construction. The listings don't mention whether or not a buyer will be expected to close before the houses are built.
Hope everyone is enjoying the cooler weather. The highest predicted temperature for Cocoa Beach in the next ten days is 79. Hurricane season officially lasts through November but if we make it to the end of October without a hit, I let myself cautiously begin to relax. Work on the new Surf oceanfront condo building in downtown Cocoa Beach is moving along at a brisk pace. I'm still hoping that the cylindrical cell tower by the new police station will be decorated as a rocket but so far nothing. In case anyone's wondering, there are 55 days until Christmas. Happy Holidays.
“To be wealthy and honored in an unjust society is a disgrace.” __Confucius
Posted by Larry Walker at 8:33 AM No comments: