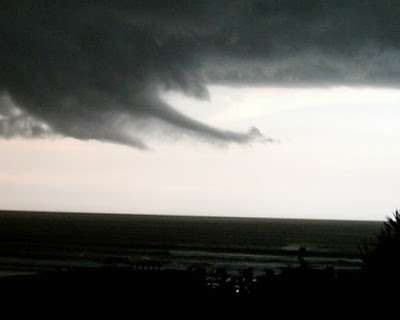 We are squarely in the daily afternoon thunderstorm season with dark fronts like the one pictured a fairly common occurrence. Independence Day fireworks are no match for the fireworks that usually accompany these afternoon storms.

The first half of 2016 ended on a strong note with a record month of property sales in Cocoa Beach and Cape Canaveral. June 2016 was the second busiest month for closed condo and townhouse units since the peak of the boom in 2005 with 77 units recorded as closed so far in the Cocoa Beach MLS. As always, that number could increase as tardy listing agents get around to closing out their sold listings. For perspective, that is 29% of the entire inventory sold in one month. In addition, during the month there were 14 closed single family homes and a single half duplex. A third of the homes sold for more than a half million dollars with two river houses closing above the million dollar mark. 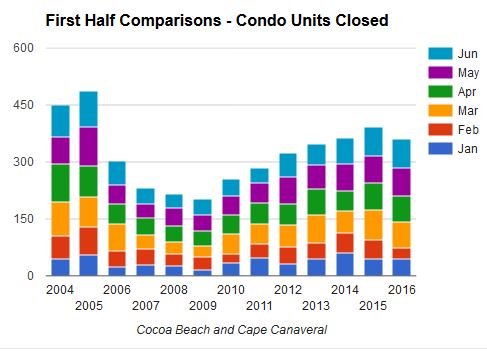 Condo sales were concentrated in the lower price ranges with two thirds of the 77 sales under $250,000. Only three units sold for a half million or more, the highest, one of the three big 4/4 Magnolia Bay units that closed for $565,000. Mortgage use for condo purchases continues to increase with just under half of the condo buyers in June using a mortgage for the purchase.

There were 81 closed single family homes and half duplexes from January 1 through the end of June. There are 55 currently for sale. Buyers who want a single family home on the water in Cocoa Beach have 31 to consider at prices from $2.95 MM for a brand new direct ocean 2 story with 4667 square feet to a nicely remodeled 55 year old 3/2 canal home with 1520 square feet asking $399,500. Almost two thirds of them have been for sale for more than 100 days so we can assume some resistance to the asking prices considering the number of buyers actively looking to purchase. Likewise over half of the condo listings have been on the market over 100 days. Same assumption about pricing can be made for most of these.

About "days on the market": This number can be manipulated by an ambitious listing agent so it can't always be trusted. Your buyer's agent can peek behind the curtain for the true listing history. A listing can be withdrawn and relisted to reset the days on market clock. Same thing can happen with an expiration and relisting. While we're on the subject of accuracy, I get lots of calls and emails from out-of-town buyers who have spotted a waterfront condo unit at a very attractive price on the MLS or one of the other big real estate websites. Those too-good-to-be-true prices are almost always misrepresented properties. While Villages of Seaport is technically an oceanfront community and a listing agent can code a listing there as "oceanfront" they never mention that the cute $115,000 two bedroom townhouse listed as "oceanfront" is actually a half mile from the beach. Likewise a smoking deal on an "oceanfront" Conquistador usually turns out to actually be in the non-waterfront Conquistador building on the west side of Ocean Beach Blvd.

Turtle nesting activity in south Cocoa Beach has been strong with a short walk on the beach most any morning revealing several new nests. 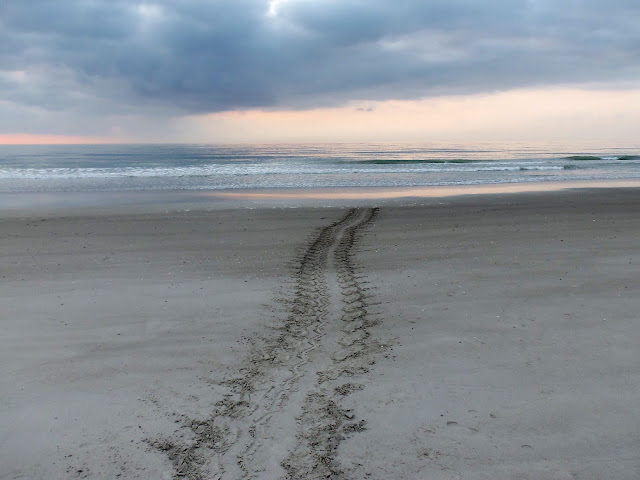 “Arguing with anonymous strangers on the Internet is a sucker's game because they almost always turn out to be—or to be indistinguishable from—self-righteous sixteen-year-olds possessing infinite amounts of free time.”  __Neal Stephenson