We had a total of 37 closed condo and townhome sales in Cocoa Beach and Cape Canaveral in the month of July as recorded in the MLS as of this morning. The number, as always, will likely creep up slightly as a few tardy listing agents record their sales. Lowest sale was a foreclosed Pearl of the Sea one bedroom unit at $45,000 and the highest was $740,000 for a mac-daddy 7 year-old penthouse unit at Ocean Terraces in downtown Cocoa Beach. It was the entire top floor, 3464 sq ft with four bedrooms, three baths and a 2 car garage.

There were three sales over a half million dollars, the most in a single month so far in 2009. Only eight of the sales were for more than $268,000. Short sale closings were off with only five closed short sales in the month. That doesn't necessarily mean that short sale activity has slowed. Anecdotal evidence from my desk and conversations with other agents suggests that there are stacks of short sales in limbo with the lenders taking longer than ever to reach a decision. If they ever start moving on the short sale process we could see a surge in closed sales.

Inventory is down to 639 condos and townhomes with 95 of those offered as short sales. There are 110 single family homes currently offered in the two cities. Only three of those are short sales.

Miss Cleo has advised that we can expect, barring a surge in closed short sales, activity to decline through December following our normal trend. If you hope to sell this year, make your selling decisions accordingly. 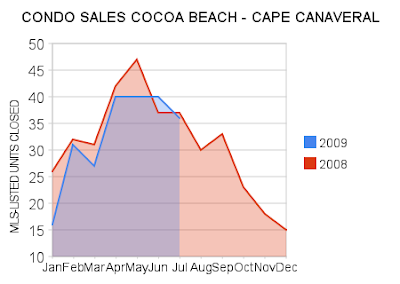