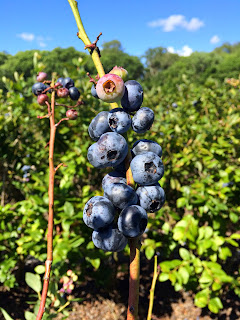 11 PM, May 7 and the first named storm of the 2015 Atlantic hurricane season, Ana, formed off the coast of South Carolina. We got a taste of this storm as it was percolating northward a few days ago with an inch of rain early Wednesday in Cocoa Beach but clear skies by dark. We have had some fun small surf from the storm and mellow longboard conditions are still lingering this morning, better south.

May is blueberry season and there are several places to pick for those interested. The photo is from Holland Family Farm in Mims where you can pick three different varieties for $3 a pound. Lots of fun and well worth the short drive from the beach. The kids will love it. No charge for the ones you eat while picking.

Our inventory according to the Cocoa Beach MLS this morning is hanging steady with 226 condos and townhomes for sale in Cocoa Beach and Cape Canaveral and 61 single family homes. Properties have recently been selling faster than new listings are appearing so it is reasonable to expect the inventory to continue to shrink. In the last four weeks there have been 54 new condo listings and during the same period 67 units were contracted. There were 13 new single family listings while 21 were contracted in the same four weeks.

Of the 61 single family homes for sale in Cocoa Beach and Cape Canaveral only one is distressed, a foreclosure. There are zero short sale single family homes. There are five foreclosed condos for sale and a lone short sale. In spite of the tight inventory, those looking for an oceanfront condo have several new  listings this week that deserve consideration at prices from the low $300s to the mid $600s. Several new riverfront listings as well. Those who understand the magic of south Cocoa Beach have several ocean and river units available. If you need a buyer's agent I'm happy to show any or all of them.

Cocoa Beach Firefighters golf tournament Saturday morning, May 9, 8 AM. Join us for a good cause. $50 for 18 holes includes lunch by Long Doggers and a shot at prizes with proceeds to benefit the CB Firefighters Charitable Fund. Weather is forecast to be perfect.

Happy Mother's Day to all qualifiers and to those in the bullpen.

"If you want to assert a truth, first make sure it's not just an opinion that you desperately want to be true."  ____Neil deGrasse Tyson

Posted by Larry Walker at 7:59 AM No comments: