Anatomy of a flip gone bad 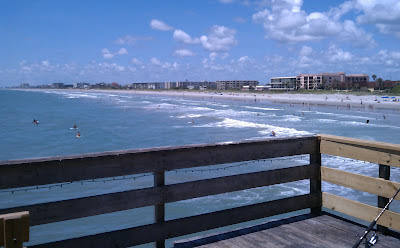 As I was doing my early morning MLS hotsheet yesterday to see what new activity had been reported in Cocoa Beach and Cape Canaveral overnight, I noticed that a house I'd shown a few times over the years had closed. It was a 50 year old canalfront 4/2 with 1764 square feet in Snug Harbor. Knowing that it had been a while since I had first shown it I checked the listing activity to refresh my memory. It went something like this:

It was listed by the seller in the summer of 2005 after he purchased the house for $570,000. Hoping to flip for a quick profit he immediately listed at an asking price of $699,900. Less than a month later the price was jacked up to $825,000. Now remember in 2005 you couldn't turn around without hearing a story or news report about the new paradigm in real estate. Heck, even the National Association of Realtor's chief economist had just published in February that year a book entitled "Are you missing out on the real estate boom? Why home values and other real estate investments will climb through the end of the decade - And how to profit from them."  Perhaps the seller had just picked up a copy of the book. I wonder how many people's lives were ruined after reading David Lereah's ill-timed tome or listening to his NAR propaganda during that time. [edit] By the way, adding insult to injury, David Lereah followed up in spring 2006 with an even more damaging missive entitled, "Why the real estate boom will not bust - and how you can profit from it." Yikes.

In January of 2006 the seller lost a wee bit of his irrational exuberance and trimmed the asking to $779,000 where it remained until March when he brought the price back to where he started 10 months earlier, $699,900. In July, exactly one year since first listing, he reduced the price by $50K to $649,900. By Labor Day we were starting to see signs that the party in run-away appreciation might be winding down. The seller was apparently not paying attention and kept the asking price unchanged until February 2007 when he made a bold price reduction of $200 to $649,700.. Perhaps he was encouraged by NAR's new $40 million  advertising campaign "Now is a great time to buy (or sell) a home." At any rate, something happened and he chopped the asking price to $499,000 on April Fool's Day. This would have been just enough to pay his $450,000 mortgage and closing costs and escape with only the down payment lost. Unfortunately, by this time, similar houses were no longer selling for anywhere close to that price.

"Like the ski resort full of girls hunting for husbands and husbands hunting for girls, the situation is not as symmetrical as it might seem"  _____Alan  MacKay