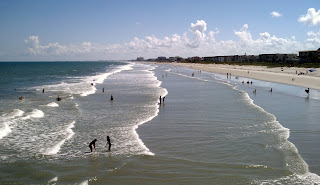 I thought I'd follow up the previous post with a little more detail about the current state of the Cocoa Beach housing market including details about the year to date stats. As of this morning, October 28, 2013, a total of 577 condos and townhomes have closed in Cocoa Beach and Cape Canaveral year to date according to our MLS. As always, because we enjoy the company of a good number of slack listing agents, the actual number is almost certainly higher. Of those sales reported, 59% or 343 units, closed for cash. That trend remains in place so far in October. Of the closed sales so far in 2013, 23% were either short sales or foreclosures. That ratio has been steadily dropping since we peaked in 2010 with over half of all sales that year distressed. Current inventory is only 9% distressed.

The for sale inventory is not exactly what it seems at first glance. The number of units for sale has increased to 275 but that includes 24 units not yet built. Those unbuilt include 16 in a proposed Puerto del Rio building on the river in Cape Canaveral ($299K to $399K) and 8 at Cocoa Cabanas ($699K to $899K) on the ocean in south Cocoa Beach. The market may have recovered enough to get one or both of these buildings out of the ground. Of the inventory in existing units, 97 have been for sale for over 6 months with no takers. That suggests unrealistic price expectations. Exclude those over-priced units and the units not yet built and we're left with 154 total units that are available for a buyer looking in our two cities. Filter that small number with individual buyer criteria and the task of finding a suitable unit becomes daunting.

In a purely anecdotal observation, we feel to have returned to our seasonal cycle (slow fall, busy spring) that was upended during the crash and years following. If that is the case, we should expect to see a decent number of new listings after the holidays. I certainly hope so. In the meantime, air temps this week have been in the 70s and 80s with clear blue skies and the surf temp is holding right at 80 degrees. Spanish mackerel are abundant in the surf blasting the billions of glass minnows. Tie on a small diamond jig or similar small lure and a surf fisherman can catch as many as his heart desires. See you on the beach.