Sorry for the break in posts. I avoided the Labor Day crowd in the mountains of North Carolina. 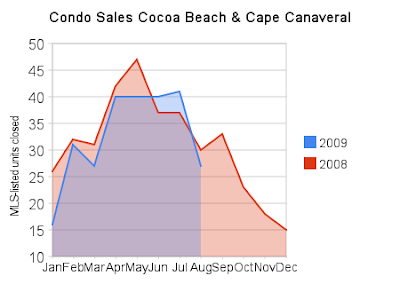 The numbers are in for August. As you can see from the graph above, we have taken the first step off the seasonal sales cliff. After trending above last year's numbers in June and July we had a total of 27 closed MLS-listed condos and townhomes in Cocoa Beach and Cape Canaveral in the month of August, slightly behind last year's 30 units closed. The sales ranged from $37,000 for a tiny Lamp Post efficiency in Cape Canaveral to $2.01 million for the entire top floor of Ocean Cove in south Cocoa Beach. This particular brand new unit was 6000 square feet with 4+ garage spaces and a private boat slip across the street on the Banana River. Shortly after this sale closed, the developer slashed over a million dollars off the prices of the remaining unsold units in the building.

Sales of note included a Meridian resale that went for $575,000, over a hundred thousand less than the new purchase price just two years ago. In south Cocoa Beach a fifth floor Crescent Beach Club south corner unit closed for $425,000. It was a three bedroom unit with 2278 square feet. Next door at the Constellation a 6th floor unit with 2419 square feet sold for $395,000 and a 5th floor south corner beautifully totally remodeled unit at Coral Sands went for $405,000.

There were only four closed single-family home sales in the month, none for more than $200,000 and none on the water.

For those looking for direct ocean units in the lower price range, I can find 29 units this morning with at least two bedrooms asking under $300,000 that are east facing. Over-priced listings still dominate the declining inventory but gems are there for the patient. If you'd like a daily dose of new listings, price drops, sales and market news of note you can follow my Twitter feed. In case you missed it, snook season has opened and the fish are already on the beach feeding on the early schools of mullet making their annual run southward. Use a cast net to catch mullet from the beach, put one back out with a weight to keep it on the bottom and hang on for some of the best eating in the ocean.

Comments are welcomed on any of the posts here.

"When a true genius appears in the world, you may know him by this sign, that the dunces are all in confederacy against him." _________Jonathan Swift