Warm again, and not a minute too soon 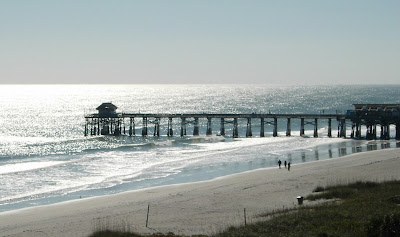 Halfway through the first month of the new year and a total of only eight MLS-listed condos and townhomes and two single-family homes have closed in Cocoa Beach and Cape Canaveral. Two of the ten were short sales. The MLS is showing 98 residential properties as contingent this morning in the two cities with 65 of those listed as short sales. We are still waiting for the rush of new listings from sellers who were waiting for the spring "selling season". There are, however, a couple of new listings of very nice non-direct ocean units in oceanfront buildings in south Cocoa Beach that appeared in the last week aggressively priced at $119,000 and $134,000. I toured a direct ocean, corner luxury unit this week also in south Cocoa Beach that is not listed but can be purchased for a very fair price, far below similar sized new units. And, if there's a quiet, well-behaved couple or small family out there who would like a furnished direct ocean rental in south Cocoa Beach for a few months or longer for an outstanding price, I know of one that will be available shortly. Not a condo. Email me for details on any of these.

In random news, Cocoa Beach has installed it's first red light camera at the light in front of Wendy's just north of the old Publix shopping center. I expect this thing to pay for itself rather quickly. The Cocoa Beach Holiday Inn became the International Palms Resort at some point in the last few weeks. Details are still sketchy. And, after a week and a half of freezing temperatures temps have moved back into the 70s today and the locals are downright giddy. In addition to damage to some tropical plants inland, the prolonged cold killed thousands of fish in the river, primarily snook, trout and tarpon. The redfish appear to have been less susceptible to the cold.