Is This Your Listing? 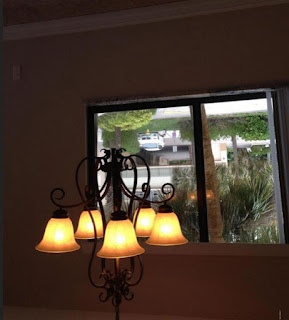 It might behoove sellers to examine their MLS listing. In addition to erroneous information the photographs may leave something to be desired. A quick reread of "How To Choose a Real Estate Agent" could prove productive.

Is this your chandelier?

The market seems to have slowed somewhat although listings continue to sell quickly if priced right. Of the 42 closed residential sales so far in July in Cocoa Beach and Cape Canaveral seventeen had a contract in four weeks or less, ten of those in six days or less. Of the 74 new listings since July 1, eighteen have already sold.

Inventory this morning remains very low with just 61 single family homes and half-duplexes and 187 condos and townhomes offered on the Cocoa Beach MLS in our two cities. Of the condos, thirty eight are asking above $500,000 but only fourteen asking less than $100,000. There is a lone short sale and eight bank-owned units offered. Three of the eight bank-owned are being offered as online auctions.

If you have seen some too-good-to-be-true prices on the MLS you may have been looking at an auction listing. Some of the banks are placing their auction listings in the MLS with very attractive asking prices. The opening bid in every auction I've followed has been far below the reserve price which has likewise been far below the final selling price.The small print on these online auctions contains a few interesting items. Buyers should exercise caution in these sales. Examples of the fine print:
A Royale Towers direct ocean 6th floor corner was auctioned this week. It showed in the MLS asking $275,000 with an opening bid on the auction site far below that. It attracted brisk bidding and sold for $340,500 to which the 5% buyers premium will be added. It will be interesting if this sale goes through the first right of refusal at Royale Towers or if a bank-owned unit is exempt from the process there. There are some complexes in which banks do not have to present a contract for first right.

I was involved in a multiple offer situation this week. When I called to alert the listing agent that an offer was forthcoming she said that she already had another offer that was "cash and higher than mine". She also offered that she hoped she hadn't mis-priced the house as it had multiple offers by the second day on the market. Hint: she did. I asked how she planned to handle the multiple offers to which she responded, "I don't know. I've never been involved in a multiple offer situation." Uh-oh. I suggested that a call for best and highest is how it's usually handled but she may want to talk to her broker. She said she'd call me back before they negotiated any offers. We got the call for best and highest shortly and our considerably over asking price, cash, quick close was bested by another. I don't want to fall into the suspicious mindset that most buyers do when asked for best and highest but considering her disclosure to me of the "cash and higher than mine" offer and her inexperience with multiple offers, well, ...

If anyone thought it had been raining ususally often and hard in Cocoa Beach the last few days, they'd be right. Somewhere between 8 and 10 inches in the city in the last two weeks. 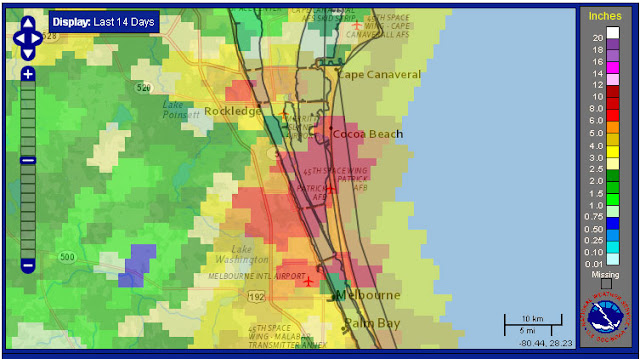