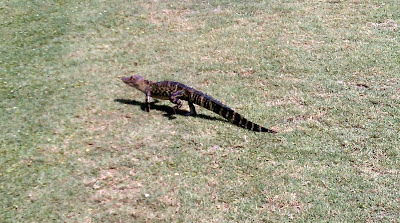 A dangerous reptile similar in size to the one above ignited a chain of events that traumatized at least one non-Floridian, changed the direction of several people's lives and left a trail of close to a million dollars of failed real estate closings and lost income in his wake. It began the day before two scheduled closings this week. The first was on a waterfront home in Melbourne Beach and the second on a waterfront condo in Cocoa Beach. The sellers of the home were also the buyers of the condo. Their contract to purchase the condo was contingent upon the successful closing of their home. The buyers of the home, who were from somewhere north of the Florida state line, had completed inspections, the mortgage was approved and they were set to close the following day. They arrived to do their final walk-through. A small alligator, oblivious to the human world, had chosen that particular sunny afternoon to soak up the warmth along the lakeshore within sight of the backyard. The soon-to-be-relocating-to-Florida couple spotted the reptile and one of them, pardon the vernacular, freaked out and called the next day's closing off. That, of course, torpedoed the closing of the condo.

The aftermath: Two families who thought they'd be moving this week are back in limbo. Two properties are back on the market. One of the two families is probably having a soul-searching discussion about their relocation to a tropical state. A title company will not be paid for two title searches and preparations for two closings. A mortgage company will not collect their fees (other than those related to application) even though loan officers, processors and underwriters spent hours on the mortgage. Three real estate agents will not collect pay checks although every task related to a sale other than the signing of the closing documents had been completed. Two sellers are changing their possibly life-altering plans and probably quite a few other as-yet unknown dominoes are teetering. All because one of the estimated 1.3 million alligators in Florida chose a particular moment and place to warm his reptilian blood. Bad gator.

"I am a bundle of nerves riddled with irrational fears."  __Tori Spelling