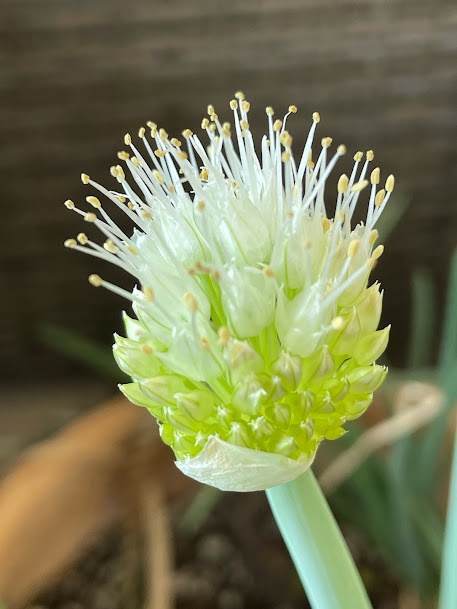 For those who think of Outback Steakhouse when they hear the term, blooming onion, behold the actual item to the left. This is one of several spring onions from Publix that I plugged into a pot on my porch two years ago. They have prospered and produced a steady stream of green onion shoots over those years and this one decided this was the year to flower. Onions are biennial plants that typically flower in their second year. Most are harvested at the end of the first year after they've produced the onion bulb in the ground and never get the chance to bloom. For those who like to grow stuff, I heartily recommend cutting off a few root ends from grocery store green onions and dropping them into the ground or a flower pot. Mine have been productive and seem to prosper on neglect all while producing tasty green shoots that I cut off with scissors with no apparent negative impact to the plants.
Our inventory seems to have reached a short-term sustainable level. The drastically depleted number of properties for sale has slowed sales enough that the stream of new listings is replacing solds at a nearly matching rate, at least for now. For condos and townhomes in Cocoa Beach and Cape Canaveral the magic number is between 50 and 60 total units. Single family home inventory has been stuck in a range between 15 and 20 total homes for sale since beginning of the year. That is a four week supply of homes at the current sales rate. Condo inventory this morning is 53 existing units for sale in our two cities. We have closed 91 units since April 1. At that rate, we have a 16 day supply of condos left. Uncharted territory although we have been steadily headed this way for years. I never dreamed I'd see the day that we had such little supply but here we are. I'd love to hear readers' thoughts on how they think this might play out. It doesn't seem sustainable but we've been imbalanced for a long time now with little effect other than rising prices and bidding wars. When we get down to the last property for sale, that multiple offer situation should be interesting.
Speaking of multiple offers, which we're seeing a lot of recently, maybe agents will start asking for sealed bids when there are multiple offers and live stream the bid openings to all participants. I'd watch a TV show that did this. I remember listing agents asking for sealed offers on a few popular listings in 2005-2006 that had received multiple offers so it isn't a new thing. I would prefer that to the way many agents handle multiple offers. After having lost in a multiple offer scenario buyers are often suspicious that details of their offer were revealed to the winning bidder or that there weren't actually any other offers to start with. Sharing of competing offer details is sometimes done with the seller's permission but a listing agent lying about a competing offer is extremely rare. Anyone offering on a nice new listing should expect there to be other offers and prepare for how they want to respond to the call for best and highest. Twice in my career I've had buyers tell me after losing in a multiple offer situation that they would have paid more. It is foolish to think you'll get a chance to improve your offer after delivering your "best and highest". Keep in mind should you find yourself asked to make your best and highest offer that there is a better than 50/50 chance that the other buyer will be offering cash. For best chances of success, keep your offer simple and as attractive as possible.
"It's easier to fool people than it is to convince them they've been fooled." __paraphrased Mark Twain
Posted by Larry Walker at 9:49 AM No comments: