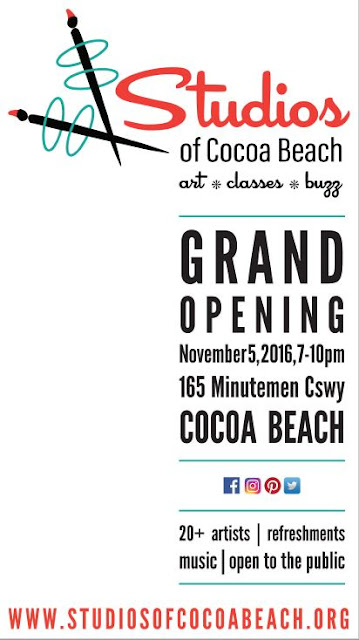 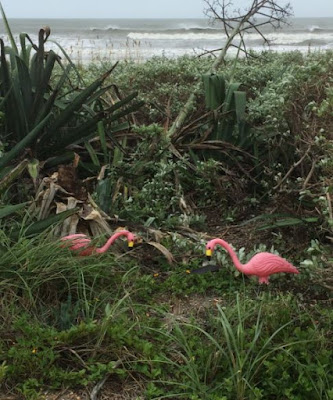 One week ago we were breathing a sigh of relief having just side-stepped Hurricane Matthew's rush northward. Our northern neighbors were not so lucky but for the most part Cocoa Beach and Cape Canaveral suffered minimal damage. The main impact here was widespread landscape damage, scattered roof damage primarily on older buildings, blown down signs, toppled fences and downed power lines. West facing shorelines on the open Banana River took a hard hit from the west winds on the back side of the storm with some severe dock damage in south Cocoa Beach. Some sections of Cocoa Beach were without power for as much as five days but most had power restored within the first couple of days post Matthew. In south Cocoa Beach most buildings never did lose power. Beach erosion was very minimal although we've had some impact from the hard onshores and high surf of the week following the storm. All in all, another blustery week at the beach. The plastic yardbirds above successfully rode out the storm hunkered down behind the Spanish bayonets and dune vegetation which didn't fare as well.

Real estate sales last month were strong coming one unit shy (65 closed units) of setting a record as the busiest September ever recorded in Cocoa Beach and Cape Canaveral for condo sales. Six oceanfront units commanded selling prices over $300 per square foot. All of those were either new or completed remodeled and several included furnishings at that price. The lowest price per square foot paid for a direct ocean unit above the ground floor was $247/sf for a 3rd floor mildly updated 1/1 Royale Towers with a garage. In a departure from the recent trend towards more buyers using mortgages, two thirds of the condo sales in September were cash deals.

Another trend I'm seeing is overpricing at initial listing. It makes sense for a seller who is in no hurry to take a chance at landing a lottery winner or frustrated buyer willing to pay more than fair current value. There are two sides to this. In a rising market a reasonable premium to current value will be overtaken with time. However, unless the unit is a unique floor plan or rarely offered type, a buyer can just wait for another acceptable unit at a better price. For a one-of-a-kind or hard to find floor plan, it may make sense to pay a reasonable premium. By the time another unit is offered, prices may have overtaken what the premium would have been. As always, homework pays off.

Knowing that this dynamic is in play makes it more prudent than ever for buyers to know exactly what property criteria matter to them AND how to approximate current value. Just hoping to get X% off asking price is not a good plan. When looking at comps be aware that the sales prices that are reported in the MLS and the Property Appraiser's site don't always include all sales details. Be especially doubtful of too-good-to-be-true prices of non-MLS sales prices at the PA's site. It is not uncommon for private parties to exchange a portion of the sales price off the record to reduce tax implications. One or two sales whether MLS or not do not reveal enough information to accurately value a comparable property unless one can be certain that all the details of the sales are known. For instance; the listing agent often doesn't indicate when closing a listing whether or not the furnishings were included in the sales price or that the seller was granted a free three month stay next snowbird season.

Our takeaway: putting an exact current market value on a property is not possible. We can only approximate. Knowing what I want in a property may be just as important as nailing down exact current value. If the perfect unit becomes available I need to be able to recognize that and make an informed decision about what I'm willing to pay to get that unit. At least some of those 65 people who closed in September went through this process successfully.

Good hunting out there. Those looking for a condo or townhome in our two cites have 207 existing units to choose from today. Less than half of those are in oceanfront buildings. Many are way overpriced. You'll increase your odds if you do your homework and find an agent you can trust who knows this market.

"Fear of the storm is usually worse than the storm itself."  ___Gail Lynne Goodwin
Posted by Larry Walker at 8:24 AM 3 comments:

I woke up in the middle of the night to the sound of a huge crashing noise that sounded like it came from my bathroom. I grabbed the nearest weapon (a formidable broken post-hole digger handle) and tiptoed into the bathroom ready for imminent batting practice. I was relieved to find not an intruder but the entire ceiling above my bathtub resting peacefully and soggily in my tub in a pool of dirty water. Turns out the upstairs neighbor had forgotten to turn the water off when filling her tub and it had overflowed and leaked through the floor and walls onto my ceiling which eventually collapsed from the weight. It got way more interesting after the initial incident.

Who is responsible for damages in this sort of incident in a multi-story condo building; the offending unit owner, the damaged unit's owner or the association? I got lucky and my neighbor made the repairs to my unit at her expense without my even asking. Had she not, I would have had to make a claim on my unit insurance as the other owner's insurance does not cover my unit. Surprisingly, neither does the association's policy.  Unknown to me at the time, my insurance company would probably have paid me and then gone after my neighbor and her insurance company and possibly the association for recovery of the money they paid me.

A similar incident happened in a unit I manage when the washer failed and leaked into the downstairs kitchen causing damage. Like my upstairs neighbor I paid to have the electrical and sheetrock damage repaired. Unknown to me, that unit owner filed a claim with their insurance company for inflated damages and collected a check for far more than the actual damages including the items that I had already taken care of and paid for. Several months later, the owner of the unit I managed received notice of a suit for damages from him by the downstairs unit owner's insurance company.

I was reminded of this last week when a lender's search of court records for a condo purchase in Cocoa Beach turned up a lawsuit against the association by a unit owner's insurance company in a similar water leak incident from one unit into another. I understand that it makes sense in a lawsuit to name as many parties as possible to increase odds of eventually settling with someone. Being named in a lawsuit even where no liability exists can be more than just a hassle for a  condo association as we found out. An unsettled lawsuit against an association will stop the mortgage process faster than a Stop Stick in the path of a speeding 69 Camaro.

In our case, the underwriter refused to sign off on the file that was otherwise approved because of unknown liability to the association, Florida law be damned. Florida Statutes appear to actually prevent an association from insuring the interior of units. For your reading enjoyment as applies to the association's insurance coverage requirements from the Statute (below); Make your own interpretations and decisions.


718.113(2). 3. The coverage must exclude all personal property within the unit or limited common elements, and floor, wall, and ceiling coverings, electrical fixtures, appliances, water heaters, water filters, built-in cabinets and countertops, and window treatments, including curtains, drapes, blinds, hardware, and similar window treatment components, or replacements of any of the foregoing which are located within the boundaries of the unit and serve only such unit. Such property and any insurance thereupon is the responsibility of the unit owner.

Hopefully we will overcome the underwriter's objections and close. Takeaway: A specific person/entity's liability may matter less than the implications of a lawsuit initiated by an owner or her insurance carrier in the absence of an equitable settlement between involved unit owners. In my original experience, no insurance company was involved, remedy costs were minimal and no other owners were affected. In my second experience and in last week's incident, all unit owners were affected by the route taken by the affected owners. Sales involving a mortgage in a complex with an unsettled lawsuit against the association even if frivolously filed as in this case may be put on hold until the suit is settled and recorded.

It may not seem fair but if you're involved in a water leak incident in a condo building you may want to weigh the costs/benefits of settling without insurance company involvement against the unintended effects of an insurance company lawsuit's scattergun approach. The damages to you or one of your neighbors from a lost or delayed sale could be far more than the cost to repair the water damage.

unintended consequences.
Read more at: http://www.brainyquote.com/quotes/keywords/unintended_consequences.html
Posted by Larry Walker at 9:58 AM No comments: