The trend is your friend 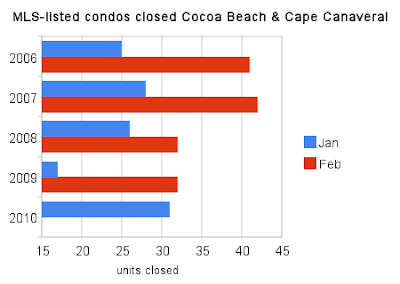 The strong sales trend of the last four months is intact as we enter the busiest time of year for real estate sales in Cocoa Beach. As of this morning, Realtors have recorded 31 condos and townhouses closed in Cocoa Beach and Cape Canaveral in the month of January. With that number, January 2010 was the best first month for sales since 2005. Looks good for February as you can see from the chart above. Seven of the 31 were short sales and nine were bank-owned. The short sales were in all price ranges including the two highest sales. The nine foreclosures were all in the lower price ranges with only one over $200,000.

Five single family homes closed in the month. Of note were two waterfront Cocoa Beach sales. One was a small 2/2 canalfront on Cocoa Isles Blvd. in mostly original condition that sold for $220,000. The other was an open water Danube River 3/2 with some upgrades that closed for a jaw-dropping $250,000.

Don't forget the last nighttime launch of a Space Shuttle this Sunday.

"Deals are meant to be renegotiated."
___Carlos (husband of Desperate Housewife Gabrielle)

Posted by Larry Walker at 1:28 PM No comments: