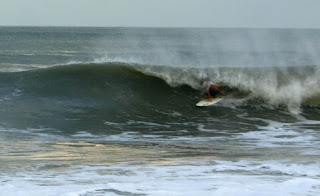 Another much-discussed subject is that of a predicted tidal wave of soon-to-arrive inventory. I can't comment on any bank's backlog of to-be-foreclosed loans as I don't have access to that info if they haven't filed a lis pendens. As Local Appraiser mentioned we can get a feel for the number of troubled owners in a complex who may be in trouble by searching for HOA liens which, in most complexes, will be recorded before a lender gets around to filing a lis pendens. Looking at one large 8 year old complex that we have discussed often we find that the association filed it's first lien for unpaid association dues in 2007. The history of this association's liens and MLS foreclosure sales is charted below. The correlation between HOA liens and foreclosure sales is obvious. There are three foreclosed units under contract at the moment with no others actively for sale. There are less than five unsatisfied liens besides the three foreclosed units under contract. Interestingly, this particular complex had it's own little mini-flood of foreclosures dumped on the market in two separate groups. The last group sold for about 20% more than the first group. As always, draw your own conclusions. 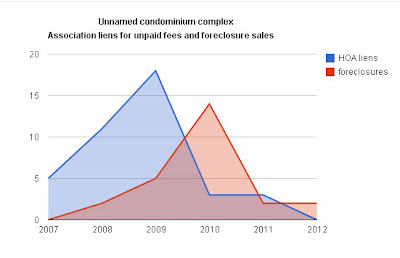 One reader is concerned that millions of new foreclosures flooding onto the market will move prices in Cocoa Beach and Cape Canaveral drastically lower. Do I think we'll see millions more foreclosures in the United States? Entirely possible. Trouble in faraway markets always has some trickle down effect in retirement and vacation home destinations like Cocoa Beach and Cape Canaveral. Potential buyers' ability and willingness to purchase here is affected by events in their home markets. Will we see a flood of foreclosures in Cocoa Beach and Cape Canaveral? I don't think so. As always, I could be wrong. Local Appraiser was kind enough to share the findings from a random sample of 30 mid to high end condo complexes. There were 38 units in some stage of foreclosure, slightly more than one unit per complex. Three times that number dumped on the market today would get our inventory back to where it was one year ago.

This brings up another point, the idea of a "market" that behaves in sync. Ours does not. The dynamics are entirely different in a complex that was completed at the peak of prices. Example: Mystic Vistas, Portside Villas, Sea Spray Townhomes, Meridian, Oak Park, etc. Because these units closed when prices were highest, every owner found themselves with a unit worth less than their purchase price within a year or two of purchase. By 2009 those who bought with a low down payment mortgage found themselves owing more than their units would sell for. Their options were; keep making payments on a depreciating property, short sale,default or sell for a loss and write a check for the difference. The ones who paid cash had the bitter luxury of being able to wait for a rebound or selling for a loss and moving on.

In complexes that were completed before the run-up of prices in the mid-2000s the dynamic was, and is, far different. Except for units that turned over during the peak years or were refinanced, the pressure to sell didn't exist. Prices did retreat in these complexes as the market cooled but at a far lower rate than the new complexes. We saw prices retreat by over 70% in some of the new buildings while some older complexes had declines of less than 30%. These older buildings are likely to have far fewer foreclosures going forward and consequently less downward pressure on prices. My point is that a flood of foreclosures, should it come, will not be equally spread among complexes and will not have equal effect. The "average" would be affected but no one buys or sells the "average".

For the record, I maintain my opinion that we will not see a flood of new foreclosures in Cocoa Beach and Cape Canaveral. The declining incidence of HOA liens seems to support the fact that there isn't a massive group of troubled owners that are freeloading on the bank's dime. Maybe there are hundreds of condo owners in default who are current on their HOA fees. I tend to agree with Local Appraiser that, whatever the number of properties that will be foreclosed, they will be not be dumped on the market at once. The banks find themselves in a good position of very low supply and can use that just like they did at Mystic Vistas to get higher prices. I could be wrong but I'll be happily wrong at the beach with my toes in the sand. Thanks to all those who commented (especially Snowy and Local A) for the spirited discussion. I gladly entertain dissenting opinions and other's research.

"Nothing in life is quite so exhilarating as to be shot at without results." ____________Winston Churchill