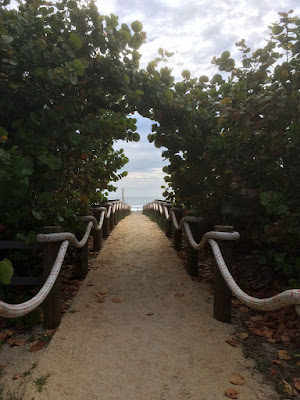 Can someone at the City explain to me why the Holiday Lane traffic light at A1A has a way shorter cycle than the much busier Cocoa Isles light? A1A traffic is repeatedly interrupted night and day for phantom traffic on Holiday. What's up with the light at Minutemen Causeway and Atlantic continuing it's cycle even while Minutemen is closed to traffic on either side? And, why do all of these lights stay on the same cycle through the night when there is minimal traffic entering A1A? Inquiring minds want to know.

A real estate contract is considered executed when all parties have finished signing. After that, the next step is to send the file to the closing agent which in Florida is usually a title company or, sometimes, an attorney's office that is also a title company. The title company then does the title search, co-ordinates with the buyer's lender if a mortgage is involved, determines tax liabilities and gets an estoppel letter from the association if the property is a condo. They then pull all this together and generate a settlement statement with exact numbers in enough time for the buyers to wire their funds for arrival by day of closing and then have all parties sign their respective documents (couriered or emailed to parties who will not be attending actual closing), disburse funds after closing and record the relevant documents. It's a complicated and under-appreciated job. The majority of closers I work with are legit rock stars at the process. I often think of them when I'm in one of those closings that have run past an hour and the closer is slowly reading every document before sliding it over for signatures. I see it like paper route math. As a paper boy if I've got 100 papers to deliver and can throw four a minute from my speeding bike, I can do my route in 25 minutes. Slow my pace down by just 21 seconds per paper or stop for  a couple of short discussions with customers and that same route takes an hour. A closer who can only do one signature page per minute is going to take at least an hour to do a 60 page closing. There are stars who can do a sixty page closing in 15 minutes. You know who you are and I appreciate you more than I can express.

Title insurance rates tend to be very close among the different companies and government charges are identical but the settlement and other fees paid to the title company can vary by several hundred dollars. In my experience, the slower and less efficient the title company, the higher these additional fees. Makes sense. A closer who can only close two or three deals a day needs to charge more to make up for inefficiency.

In Florida the seller typically selects the title company since they are the ones paying (usually) for the buyer's owner's policy. If the seller doesn't have a preference, their listing agent will suggest a title company that's, hopefully, conveniently located and good at what they do. Sometimes they are neither. I wish it were different because the difference in closing agent can be the difference in whether a transaction closes on time or actually closes at all. Since the buyer has very little influence in the selection I would encourage listing agents to recommend title companies that are good at what they do and to please use one somewhat close to the property and/or principals. It is a disservice to the seller and buyer of a Cocoa Beach condo when the listing agent selects a title company in Palm Bay because it's convenient to her office. Likewise for continuing to use a company that wastes everyone's time with closings that last way too long. I'm thinking specifically about a closing last month attended by nine people that took an hour and a half for no good reason. There were times when I expected someone to poke the closer to see if she was still awake. 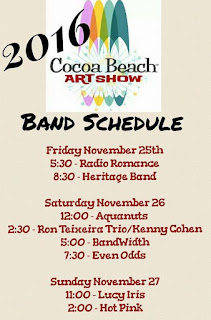 As expected, mortgage rates rose sharply this past week as the bond market sold off. Freddie Mac's Thursday mortgage rate survey showed the nationwide average rate for a 30 year fixed rate mortgage at 3.94%,  half a percentage point higher than in early October and a .37% rise in one week. We began 2016 with rates at 3.97%.

Cocoa Beach Art Show this coming weekend. The live music lineup is stellar this year. Things kick off Black Friday at 5:30 with Nashville's Radio Romance on the big stage. We get to see these boys a few times a year at Juice and Java and it'll be a treat to see them on the big stage again. There's a good chance we'll be looking back one day saying "I remember seeing those guys before they hit the big time."