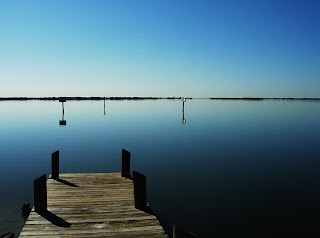 Nine of the 24 condos closed so far in August were on the market for less than a month. This is the new normal in our market. One quarter of the closed units sold for less than $100,000 and only three sold for more than $233,000 including a mack-daddy penthouse unit at Ocean Club with 4565 square feet and 20' ceilings that sold for $800,000. Of the 24 sold units, five were distressed. In a radical departure from the trend of the last few years, cash sales lagged financed purchases. Fifteen of the 24 condo purchases were financed and only nine sold for cash.

Lowest price for a direct ocean unobstructed view was $192,000 for a 4th floor Wellington 2/2 in downtown Cocoa Beach. Only 1049 square feet and open parking, BUT, 4th floor direct ocean within a few blocks of over two dozen restaurants and the post office and library for less than $200,000.

A foreclosed, 2nd floor, direct ocean Boardwalk 2/2, also in downtown Cocoa Beach, closed for $231,900. Not a bad price for 1296 square feet and a garage and the ability to rent weekly.

Also in downtown Cocoa Beach, a fully furnished and nicely remodeled 2nd floor Ocean Pines direct ocean2/2 with 1353 square feet and garage closed for $300,000. Note that the selling prices of these units varied in dollars per square foot by around 20% at the extreme.

A new ten year low price at Emerald Seas recorded at $225,000. This was for a direct ocean 2nd floor 2/2 with 1602 square feet. Partially obstructed ocean view from the 2nd floor here because of all the palm trees but still quite a deal, in my opinion, at this price in this complex.

Another 2nd floor direct ocean unit, this one at Mystic Vistas (A building), closed for $280,000. Even less of an ocean view here because of the row of townhomes between the building and the ocean but still a nice 8 year old 3/2 unit with 1775 square feet and garage. Sold fully furnished.

A Spanish Main weekly rental 2/2 on the 2nd floor with direct ocean views over the pool closed for $180,000. This unit unlike many Spanish Main units has a garage. The seller financed part of the purchase price.

Six single family homes have closed so far in the month of August in Cocoa Beach and Cape Canaveral. A 3002 square foot 4 bedroom, 3 bath with a three car garage in Discovery Bay in Cape Canaveral sold for $579,000. This beautifully appointed canal-front home is three years old and has a pool and covered boat dock.

A very nicely remodeled canal-front 4/4 pool home in the Cocoa Beach Country Club subdivision closed for $548,000. It has 2550 square feet and a boat dock.

We continue to be locked in our summer pattern of calm mornings followed by afternoon thunderstorms. Temps have remained mild in areas close to the ocean as the afternoon sea breeze off the colder than normal ocean serves as a natural air conditioning system. Turtle nesting and hatching also continues at a very intense pace. While offshore last week I saw dozens of adult and hatchling turtles swimming in the calm Atlantic. Some areas of the beach have so many nests that the beach appears to have been the scene of a tractor pull.