Some Magic, Some Tragic

A quick flashback: I was reading old posts and found the one below from eleven years ago and it was such a great story I thought I'd share again for those that may have missed it. An update; Humphrey is happily retired in Australia and while he's done plenty of roads trips in Oz, none have been solo. 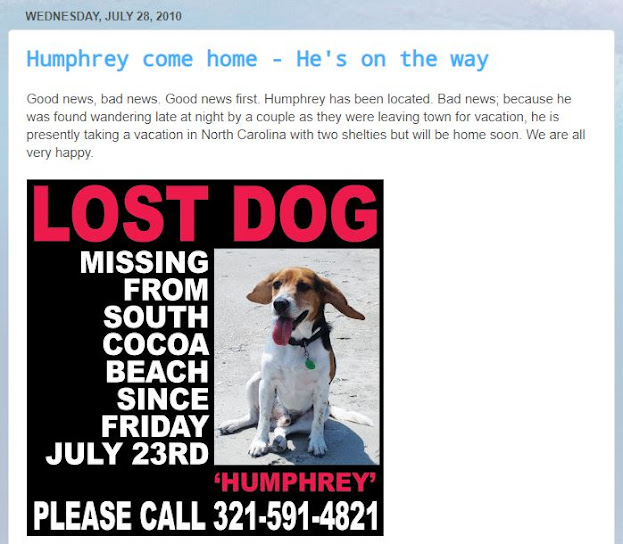 In a much-circulated article this week, the Wall Street Journal reported that there are more real estate agents than properties for sale in the US. It's been that way for a long time in Cocoa Beach and Cape Canaveral. If I search for a Cocoa Beach agent on Zillow, I get 250 hits. That is 200 more than the number of agents who have listings in Cocoa Beach and Cape Canaveral and 165 more than the total number of residential listings in the two cities. How can this be sustainable? It's actually worse than it looks. In addition to the 250 there are agents like myself that aren't part of the Zillow scrum so the number of pigs at the trough far exceeds the capacity of our tiny and shrinking feed bucket. Except for a handful of super agents and teams, the majority of the agents who do manage to list or sell a property here will only record one or two transactions in a year. With total residential inventory of 85 properties that is rapidly shrinking, I think we can safely expect many agents to reach a crisis point this year. Many of them already work out of offices off the beach so they can shift their focus to their home markets. Those working out of beach offices will have to either accept lower income or start crossing bridges to Merritt Island and mainland markets. Those markets are experiencing similar inventory drawdowns so competition among agents will get even more intense. I see no reason not to expect hungry agents to begin offering discount services to keep food on the table. Compete or eat is an easy decision.

Prices. They're ranging between high and ridiculous. We've had ten units without garages sell in oceanfront complexes since January 1 for over $300 per square foot. We're at and above 2006 peak prices in many older buildings. Conditions are different now but I would still advise buyers to be cautious. As I was writing this a new listing for a small oceanfront one bedroom unit hit the market at the incredible price of $459,900. Successful buyers will probably have to pay above fair value if they hope to purchase something but there is little need to blindly pay asking price or above without first knowing what fair value is. In the case of the $459,900 unit, the comps suggest fair value as possibly six figures less than asking. Having said that, there may be someone willing to pinch their nose and pay it.

I watched two surfers on foil boards being whipped into waves by jet skis way offshore last Sunday during the big beautiful north swell and get rides that were several blocks long at speeds that a regular board can't achieve on the same waves. When I caught my first small wave on a heavy 10' rental several decades ago I never dreamed that one day I'd see surfers flying along on tiny boards that didn't even touch the water while riding wave after wave for over a quarter mile. I feel old. Happy Easter everyone.

"Some of it’s magic, some of it’s tragic, but I had a good life all the way." __Jimmy Buffett