The poet, James Oppenheim said, "The foolish man seeks happiness in the distance, the wise grows it under his feet." I suspect he never surfed but his words certainly apply. By his definition, here's a wise man in south Cocoa Beach. 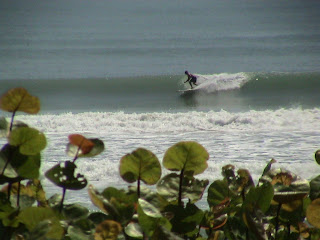 Sales in Cocoa Beach and Cape Canaveral through the 22nd of July have been steady and we look to hold right on the sales trend of the first half of this year. The numbers of closed over $500,000 condos will be showing an uptick this month and probably next as the few MLS-listed pre-construction contracts at Meridian in north Cocoa Beach begin recording. It's an anomaly that these high-priced units are closing while other similarly-priced condo projects are showing zero sales activity presumably because of defaults and, maybe, developer-granted extensions. The 62 unit Magnolia Bay project has not had a deed recorded since April. I can find only 8 total recorded sales for this complex at the Brevard Property Appraiser's site since the first one closed in January. Meanwhile a new luxury project is breaking ground just south of Magnolia Bay on the ocean in south Cocoa Beach. Go figure.

The direct ocean 2nd floor corner at Wavecrest in south Cocoa Beach that I featured in "False Realities" in June is under contract after dropping the asking price to $399,000. I'm not surprised. The other unit in that piece, the 2nd floor corner unit at Crescent Beach Club, is still for sale at $419,000 having stairstepped down from $649,000 over a 3 year period while just next door a considerably smaller unit on the same floor got a contract in 2 weeks after offering for $425,000. Sellers take note.

I have updated the closed numbers for the year. The early reports are always a little shy of actual as lazy listing agents often take weeks and months to record a sale as closed. These numbers are accurate as of this morning, July 22, 2007.

Of the closed condo sales so far this month in Cocoa Beach and Cape Canaveral, the average days on market is 256 and the selling price average is 75% of original asking price. These numbers are scrubbed to correct for agent manipulations and with the 3 pre-construction sales thrown out.

Until next time, please take note when you see the fast-moving thunderstorms that are so common this time of year. Get inside before the storm gets to you. Lightning will kill you and can strike long before the storm actually arrives. Be safe, please.

Stats, Deals and an Alpha Male

In Cocoa Beach and Cape Canaveral, sales of condos and homes held at a slow but steady pace halfway through July and prices continued their downward slide. Our inventory of MLS-listed properties is slightly smaller again this month but we are still at historically high levels. Here are a few representative sales since July 1st.

Our inventory numbers for Friday the 13th of July, 2007 are:

I'll leave you with a picture of an alpha male brown anole sunning outside my window on July 4th. Notice the giant ridge (called a roach) on his back. These are only found on the males and are rarely this big. This guy is definitely king of his world.

Posted by Larry Walker at 10:09 AM No comments: