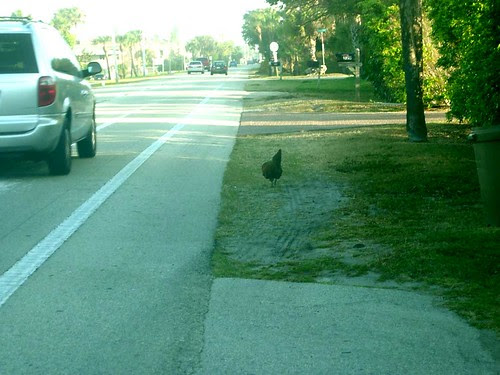 We're well into snowbird season now at the end of February and the usual mellow and easy pace of life in Cocoa Beach becomes somewhat more intense through the end of March. Traffic is not what the locals are used to and the strain is starting to show. It starts innocently enough late in January with an ill-timed U turn at 520 and A1A holding up traffic through two light changes and progresses to daily no-tee-time-available status at the Cocoa Beach Country Club. Blocker cars piloted by wrap-around-goggle wearing shuffleboard aces are strategically spaced out along A1A, cruise controls locked on 28 MPH, effectively turning normal traffic flow into a Macy's parade without balloons and making a short drive up the beach an exercise in time management. At the Publix grocery store, shoppers must first navigate the all-male scrum around the free coffee at the front of the store to gain access to the actual game surface. Past the registers the shopping becomes much more competitive with success depending on a shopper's ability to take or avoid the aggressive checks being thrown on every aisle by the coffee-drinkers' partners. The approach to the check-out line can be the defining moment as players jockey for the shortest line when a well-placed titanium hip shot from Gretsky's grandma with a full cart and a handful of coupons can turn a quick trip for a deli sandwich into a thirty minute outing. While these are all minor irritations, they are a favorite subject this time of year and we all indulge, from the laid back bicycle-riding Beach Shack drinking crew to the grumpy hippies at the Co-op. We love our snowbirds but we like to grumble as well. Ain't that America.