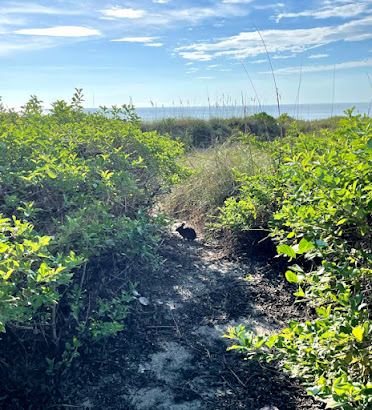 This market isn't finished yet despite the tripling of inventory since spring. This morning of the second attempt to fly the Artemis 1 mission to the moon, there are 114 existing condos and townhomes for sale in Cocoa Beach and Cape Canaveral plus another four pre-construction offerings. There are 31 single family homes for sale with only one asking less than $525,000.

In the month of August 63 MLS-listed condo and townhome units closed with a median selling price of just over $400,000. Over half of the sold units commanded over $300 per square foot. A couple of years ago only the very nicest direct ocean units were selling for more than $300/sf. In August ten units in buildings not even on the ocean and without garages closed for more than $300/sf. Over half of the condo sales were cash deals and weekly rental units were still closing at the top of the $/sf range. Twenty five units sold in seven days or less with six of them selling before hitting the market. Highest price sale of the month was $1,200,000 for a 4th floor, 15 year old 3/2 beauty at The Meridian in north Cocoa Beach. Lowest price was $165,000 for a clean little, 56 year old, 2nd floor 1/1 in Cape Canaveral a couple of blocks from the ocean.

There were 15 single family homes closed in Cocoa Beach in August and two in Cape Canaveral. Five of the sold houses closed at prices above one million. The starting price for a fixer-upper, non-waterfront house is now about $500,000 thanks to AirBnB mania. The idea of making big money renting to vacationers is fueling demand for the 50+ year old houses close to the beach and is causing problems in our once-peaceful neighborhoods. The City of Cocoa Beach has been discussing new fees and penalties for noise complaints from the growing number of single family vacation rentals. They are a little tardy on taking action but the measures they are discussing will hopefully help preserve the family nature of our neighborhoods.

Hopefully we'll get to see the Artemis mission fly today after many delays and issues with the vehicle. Labor Day weekend is traditionally one of the busiest weekends of the year here but today will probably break all previous records with hundreds of thousands of people coming to see the launch added to the NKF surf contest crowd and passengers coming and going from four cruise ships in port. Yours truly will be hunkered down for the duration. Enjoy the beautiful weather and expect mind-numbing traffic.

"Consider the example of the monkey -- who, the higher he climbs, the more he shows his behind." _St. Bonaventure, the 13th-century Franciscan philosopher speaking about power and wealth